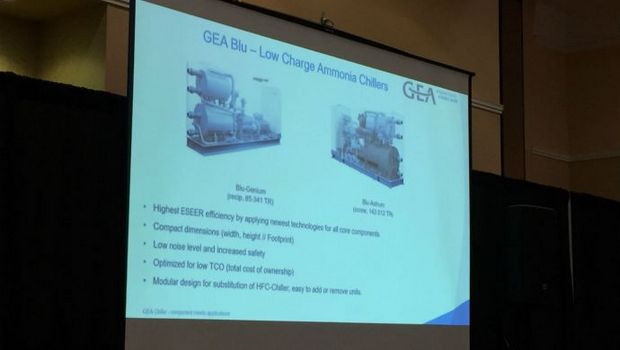 German OEM GEA, whose North American office is in York, Pa., has announced that its GEA Blu low-charge ammonia chillers, which have been sold in Europe are now available in the U.S.

The Blu line has a temperature range of between 5°F and 60°F.

For example, GEA has sold “nearly 300 units of the modular Blu-Astrum chiller in Europe (primarily with glycol) since its launch in 2012,” said Lawrence Bradley, director of solution sales – refrigeration for GEA North America in a presentation in March at the IIAR Natural Refrigeration Conference & Expo. This chiller uses a screw compressor and offers capacities of between 156 and 492 TR, and an ammonia charge range of between 110 and 242 lbs.

The Blu-Genium chiller uses a reciprocating compressor and delvers capacities of between 85 and 341 TR.