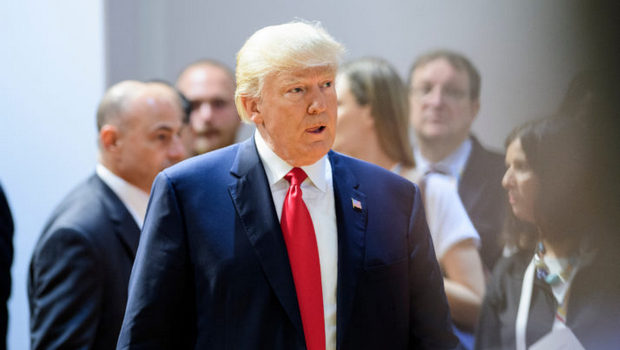 Leaders of the G20 richest nations agreed to disagree on climate change, unanimously supporting a final communiqué in which all of them except U.S. President Donald Trump declare the Paris climate agreement to be “irreversible” and needing action “swiftly.”

The text of the final communiqué does contain face-saving language for Trump though, stating that “[the U.S.] will endeavor to work closely with other countries to help them access and use fossil fuels more cleanly and efficiently.”

The unanimous statement — with a carve-out for Trump — is a diplomatic coup for the summit’s host, German Chancellor Angel Merkel, who had been determined to cement the unity of the G19 in the face of Trump’s intention to pull out of the climate agreement. There had been fears that the U.S. could peel off one or two other countries in a bid to significantly water down the final text on climate change.

The final communiqué of the G7 summit in May also included split language on the climate issue, although it was easier to finesse the differing positions of Trump and the rest because at that point the U.S. president had not announced his decision to withdraw from Paris. It stated that the U.S. was reviewing its climate policy and so was “not in a position to join the consensus on these topics”.

The text of the G20 statement deals with the split by taking note of the U.S. position before outlining a commitment to the Paris agreement from the “other G20 members.”

The G20 leaders will declare:

“We take note of the decision of the United States of America to withdraw from the Paris Agreement. The United States of America announced it will immediately cease the implementation of its current nationally-determined contribution and affirms its strong commitment to an approach that lowers emissions while supporting economic growth and improving energy security needs. The United States of America states it will endeavor to work closely with other countries to help them access and use fossil fuels more cleanly and efficiently and help deploy renewable and other clean energy sources, given the importance of energy access and security in their nationally-determined contributions.

“The Leaders of the other G20 members state that the Paris Agreement is irreversible. We reiterate the importance of fulfilling the UNFCCC [UN Framework Convention on Climate Change] commitment by developed countries in providing means of implementation including financial resources to assist developing countries with respect to both mitigation and adaptation actions in line with Paris outcomes and acknowledge the OECD’s report “Investing in Climate, Investing in Growth”. We reaffirm our strong commitment to the Paris Agreement, moving swiftly towards its full implementation in accordance with the principle of common but differentiated responsibilities and respective capabilities, in the light of different national circumstances and, to this end, we agree to the G20 Hamburg Climate and Energy Action Plan for Growth as set out in the Annex.”