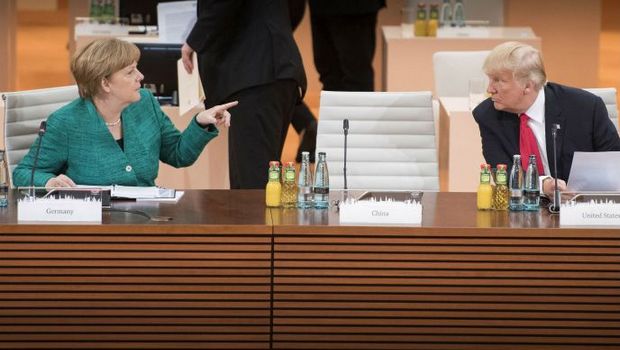 The group of the world’s 20 biggest economies also pushed forward with their plans to phase-down HFCs.

After lengthy negotiations at their summit in Hamburg, the G20 pledged to continue with its efforts to combat climate change despite U.S. reluctance, saying in a statement: “We take note of the decision of the United States of America to withdraw from the Paris Agreement” but deem the agreement “irreversible”.

The G20 meeting in Hamburg, Germany (7-8 July) comes a month after U.S. President Donald Trump announced his decision to withdraw from the climate change accord known as the Paris Agreement.

“The other G20 leaders cannot wait for Donald Trump to grow up,” said Karsten Smid, a climate expert at Greenpeace Germany, ahead of the summit.

In the joint communiqué at the G20 meeting, the 19 other members reaffirmed their “strong commitment to the Paris Agreement”.

The other members also agreed on a joint climate and energy plan, which among other initiatives encouraged “G20 members to proceed with their respective domestic procedures for joining the Kigali Amendment to the Montreal Protocol to phase down hydrofluorocarbons”.

This week the 39th Meeting of the Open-Ended Working Group (OEWG39) of the Parties to the Montreal Protocol will take place on 11-14 July in Bangkok, Thailand, covering access to finance to implement the global phase down of HFCs.

This meeting is significant as it follows the adoption of the Kigali Amendment to the Montreal Protocol in October 2016, which phases down the production and usage of hydrofluorocarbons (HFCs) at global level.

The G20 climate plan also emphasised that the energy transition needs to take place in the “heating and cooling, transport, and industry sectors”.

The plan states: “The United States is currently in the process of reviewing many of its policies related to climate change and continues to reserve its position.”

A recent study by Greenpeace Germany found that in about half of the G20 countries, renewable energy has become cheaper or equal in price to electricity generated from coal or nuclear power plants since 2015.

“There can be no excuses any more. Climate protection increasingly makes economic sense across the G20 as renewable energy becomes cheaper than dirty coal and nuclear,” Greenpeace Germany energy expert Tobias Austrup added.