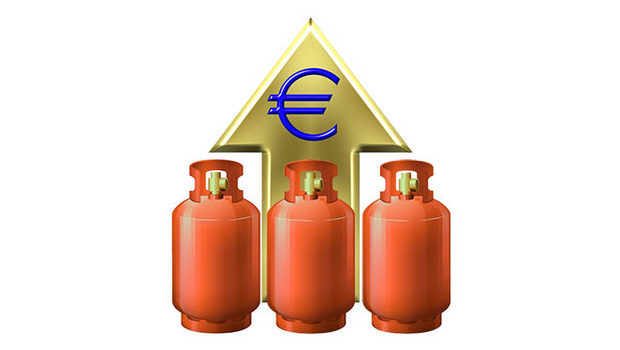 The huge price increases in HFC refrigerants appear to have ended, at least in the short term, with some refrigerants even dropping in price.

The latest report by Öko-Recherche into F-gas pricing reveals that price increases in the second lag of this year have eased. The price of R404A, which saw huge increases in 2017, has fallen, while a slight price drop has been observed for R407C and R 410A in the third quarter of 2018.

The price of R32, which is being promoted as the lower GWP alternative to R410A in smaller splits, has dropped over the past year by about 15%. In contrast, the cost of the “natural” refrigerants R 290 (propane) and CO2 remain low, and have even shown small price drops.

However, despite the apparent stabilisation, some of the companies who contributed to the price survey expect a future “wave-like” trend of price increases at the beginning of the year, with falling prices towards the end of the year.

A number of different aspects are thought to be responsible for the stabilisation of prices including stockpiling in previous years, increased care in handling refrigerants and the continuing illegal F-gas trade. 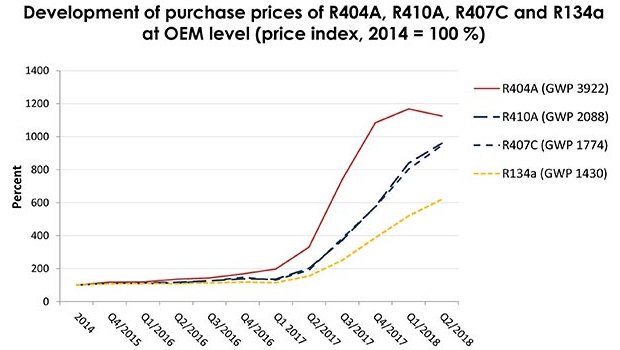 Refrigeration consultant Ray Gluckman observed a number of key factors that were contributing to the European industry’s apparent ability to now cope with the European F-gas phase down. On the positive side he saw a faster uptake of low GWP refrigerants in new equipment and far more attention being paid to leak reduction as a result of the higher prices. Supermarkets have also stepped up their R404A retrofit programmes to the extent that some are becoming self-sufficient in obtaining their own R404A from retirements and retrofits.

However, it is uncertain to what extent illegal F-gas imports and sales are having on the industry’s ability to cope when, according to fluorocarbons group the EFCTC, the illegal trade could represent as much as 20 to 25MT CO2e.