Europe within phase-down quota in 2015

The EEA is to report that the amount of HFC refrigerant placed on the market in 2015 – the first year of the phase-down mechanism – was within the quota allowance.

The full report, which is yet to be published by the European Environment Agency (EEA), will indicate that the total amount of compliance-relevant HFC refrigerant placed on the market in 2015 amounted to 168Mt CO2eq, and within the cap amount for the year of 183Mt CO2eq.

However, that figure, is already being challenged by Honeywell. The refrigerant producer recently claimed that over 10Mt of CO2 equivalent HFCs were illegally imported into the EU in 2015.

The European phase-down, like the recently agreed global phase-down commitments under the Montreal Protocol, is based on CO2 equivalents. Under the European F-gas regulations annual quotas are allocated to companies based on the allowance for the year.

2015 was the first year of the European phase-down, with the total quota allocation capped at 183Mt CO2eq. In the previous year, however, imports of HFC refrigerants into Europe almost doubled compared to 2013, suggesting widespread stockpiling in anticipation of the phase-down.

“Certainly the 2015 data is benefiting from the fact that there was a lot of stockpiling at the end of 2014 which should not be underestimated,” commented Dr Patrick Amrhein, Honeywell’s fluorine products marketing director for EMEA.

“In the end the 8% “over-achievement” has nothing to do with companies switching to low GWP solutions – which is not happening at the pace it should have happened – nor does it tell anything about illegal imports as they are not captured by the method [the reported placing on the market] the EEA is using,” he added.

He also maintained that the data from the report does not match with the import statistics that Honeywell has seen.

“The fact that -8% was reported compared to the baseline suggests that there is an even higher number of illegal material floating around in the EU as previous estimates were based on the fact that only material that is over the maximum baseline is considered to be illegal.

“We think that this report encourages in the end the illegal practice as everyone involved in dubious actions will find this report very compelling.”

And Honeywell insists that the illegal importing has continued this year. 2016 is supposed to see a 7% reduction but Honeywell has claimed that some countries are now importing as much as 2.5 times as much as they were pre-phase-down.

Critics claim that there is a disconnect between the national customs authorities and the phase-down regulations. Customs authorities are not obliged to check if an importer has a quota allocation. Neither do they have a means of checking if an allocation has been exceeded. 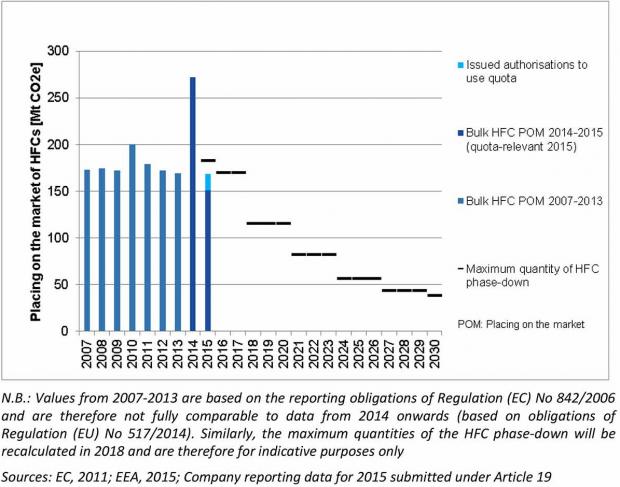