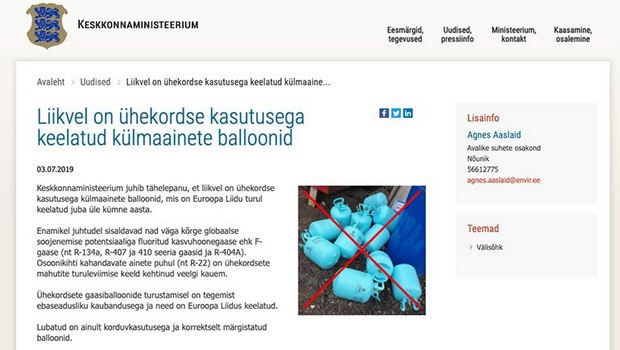 Warnings regarding the proliferation of refrigerant in illegal disposable cylinders have been issued by the Estonia’s Ministry of the Environment.

The warning on the Ministry’s website points out that disposable refrigerant cylinders are banned in the EU and that only reusable and correctly marked cylinders are allowed.

It also warns that disposable cylinders are not safe, do not meet the requirements for pressure equipment, and contravene the European carriage of dangerous goods acts.

The Environment Ministry goes on to advise the public how to spot an illegal cylinder and to inform the Environmental Inspectorate if they suspect any illegal activity.
Last year, the Estonian Tax and Customs Board reported “a significant increase” in the number of attempts to import refrigerant from outside the EU. There were said to have been virtually no such occurrences in 2017.