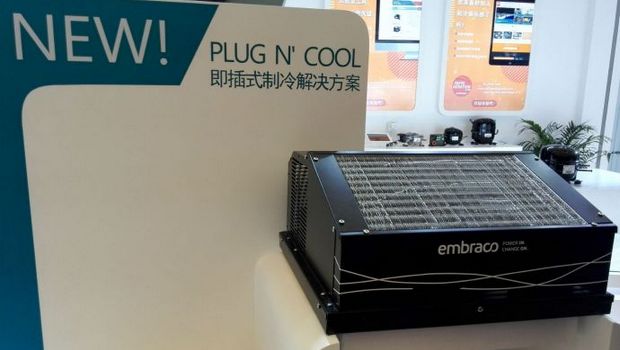 In a sign that Chinese companies are collaborating with their Western counterparts to bring natural refrigerant solutions to China, Brazilian compressor manufacturer Embraco launched a plug ‘n’ cool propane-based (R290) system with HAIER on the first day of China Refrigeration 2017.

According to Euromonitor, HAIER is one of the world’s largest appliance (or white goods) manufacturers, boasting 10.2% of retail volume market share.

“We are proud to launch this product with R290 with HAIER. It’s really important for the Chinese market,” Herlon Eckermann da Silva, sales account manager for the Asia-Pacific region at Embraco, said.

Eckermann stresses the product’s flexibility and ease of maintenance for users. “So you can just plug ‘n’ cool,” he enthused.

Jason Qian, sales and marketing director for China at Embraco, added that the unit marks a big change from conventional freon based systems. “[Previously] it took four or five hours to replace the stuff, but with plug ‘n’ cool, it’s just 20 minutes and you get everything fixed,” Qian said.