A new paper from the compressor manufacturer looks at future refrigerant use in the light commercial sector. 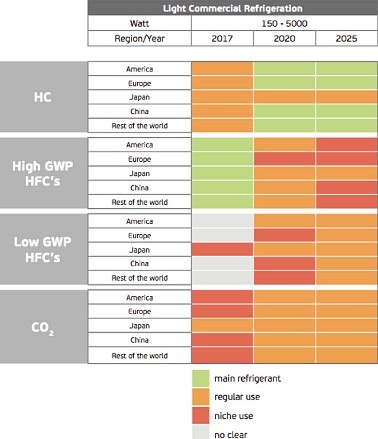 Hydrocarbons and CO2 will take centre stage in the greener refrigeration of the future, according to a position paper published this month by Brazilian compressor manufacturer Embraco entitled “Light Commercial Refrigeration Refrigerants Outlook 2017: ‘Refrigerant options now and in the future’”.

In a policy statement, Embraco pledges to “support proactively [the] use of natural refrigerants without any compromise for safety of appliances including technician training”.

“Today, present IEC standard used for hermetically sealed applications, (EN60335-2-89), is limiting to 150 grams the charge of any flammable refrigerant, which makes the transition to low GWP refrigerants difficult,” the paper states.

Embraco believes the IEC SC61C/WG4 working group will change this for the commercial refrigeration sector. It cites 2018 as the likely date of the working group’s final decision to increase the refrigerant charge.

The paper concludes, “hydrocarbons (isobutane-R600a and propane-R290), represent the best, long-term solution for light commercial applications both in low and medium pressure”.