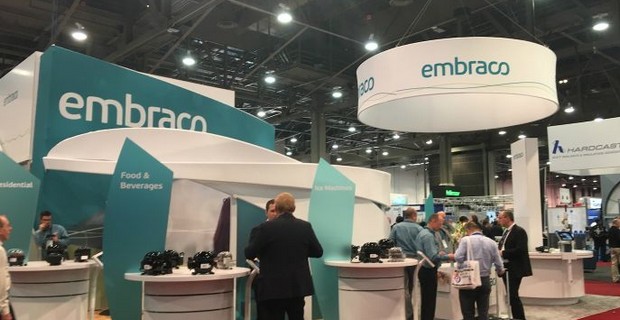 The EMC compressor – one of the world’s most efficient single speed compressors – for propane applications is among the technologies on display.

Embraco, the Brazilian compressor maker, is banking on a combination of hydrocarbon refrigerants and cutting-edge compressors to maximise the energy efficiency of small commercial refrigeration equipment. The EMC compressor – one of the world’s most efficient single speed compressors – for propane applications is among the technologies on display at this week’s AHR Expo in Las Vegas (30 Jan.-Feb. 1).

The EMC Compressor is designed for beverage coolers, vending machines, under-counters and reach-ins. It features a smaller platform, with an extended cooling capacity that can replace larger compressors, releasing more internal space for the refrigerators.

75% of Embraco’s commercial compressors are already made to accommodate propane.

Also on display at the AHR Expo is the Plug N’ Cool, a complete propane cooling solution available for reach-in freezers and refrigerators in supermarkets, convenience stores and professional kitchens. The Plug N’ Cool complies with all U.S. Environmental Protection Agency (EPA) and Department of Energy regulations.

Its modular concept simplifies the installation process and offers flexibility for store layout. As a self-contained solution it does not require a machine room, providing more space for food retailers.

Hydrocarbons isobutane (R600a) or propane at a charge of 150g will alone boost the energy efficiency of a commercial self-contained refrigeration unit by 5% to 15% over traditional refrigerants, according to Peter Bukšár, technical support senior specialist for Embraco.