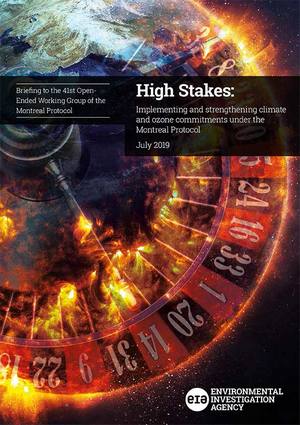 The Environmental Investigation Agency has called for a “comprehensive fitness check” of the Montreal Protocol to ensure the phase out of ODS and the phase down of HFC refrigerants.

In particular the green group refers to recent revelations regarding the spike in emissions of the ozone-depleting, and supposedly banned CFC11 and the challenges that illegal trade will bring with the elimination of HCFCs and phase down of HFCs.

“The huge and alarming CFC11 spike must inevitably raise questions as to the fitness of the Montreal Protocol’s institutions and controls,” commented EIA climate campaigner Sophie Geoghegan. “This considerable illegal trade, including illicit production as well as use, happened on the Protocol’s watch and we’re calling for a comprehensive fitness check of the Montreal Protocol to ensure it keeps ahead of the game. These will ensure not only that ozone-depleting substances continue to be phased out but also that the Protocol can properly address new challenges unique to the phase-down of hydrofluorocarbons (HFCs) under the Kigali Amendment.”

Concerns are also raised about the possibility of illegal trade/counterfeiting in HFO1234yf in the MAC sector. The report points to the the move away from CFCs to R134a and how the increased cost of R134a in 2012 compared to CFCs lead to a surge in counterfeit R134a. “This counterfeit HFC-134a was found to contain CFCs and toxic and flammable components which pose serious treats to the environment and human safety when used,” says the report.

The EIA repeats warnings that the large price differential between R134a and its replacement, R1234yf, being phased in in some parts of the world, may lead to even more significant problems for illegal trade and counterfeiting.

“Europe is already witnessing significant illegal HFC use in the mobile air conditioning sector, as the F-gas regulation is rapidly cutting HFC use and raising prices. Unless strong measures are taken to improve enforcement and close regulatory loopholes, the shift to HFO-1234yf will undoubtedly result in widespread counterfeiting with significant environmental and human safety impacts,” it says.