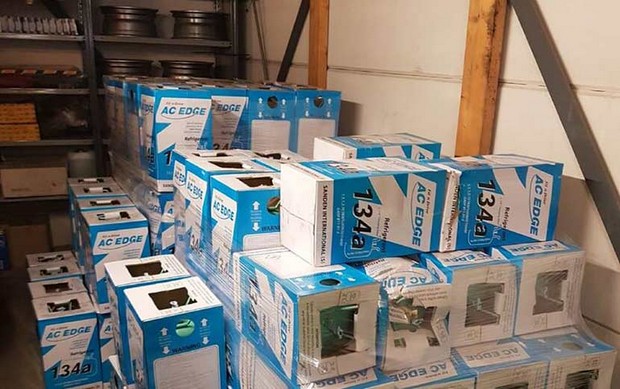 The EIA has called for stronger enforcement by member states and the introduction of a shipment licensing system to counter the illegal European trade in HFC refrigerants.

An in-depth report by the Environmental Investigation Agency (EIA), published today, confirms the large-scale illegal trade in HFC refrigerants and reveals that a large number of EU countries recorded significantly increased HFC imports in 2018, despite the major HFC supply cut of 37%.

The report, Doors Wide Open, is described as the most comprehensive research of its kind into the criminal HFC trade and documents how, as early as 2016 and despite huge stockpiling of HFCs in 2014, reports of illegal HFCs in European markets began to emerge.

EIA campaigners have since seen an escalation in reported illegal HFC trade, with 2018 witnessing a deluge of illegal HFC use and trade throughout the EU.

The EIA’s analysis of customs data for 2018 suggests as much as 16.3 MtCO2e bulk HFCs were illegally placed on the market, equivalent to more than 16% of the quota. Previous reports by the refrigerant manufacturers put the illegal import figure at around 22.5MtCO2e.

The environmental group also compared 2017 customs data to figures reported under the F-gas regulation. The customs data indicates an additional 14.8 MtCO2e of HFCs placed on the European market compared to reported data, equivalent to 8.7 per cent of the 2017 quota. Significant discrepancies are also said to exist between Chinese export figures and Europe’s import data, which could indicate fraudulent import declarations.

Sophie Geoghegan, EIA climate campaigner, called on the European Commission and Member States to examine these discrepancies “as a matter of urgency”.

The EIA says that the F-gas phase down – a key initiative in Europe’s strategy to fight climate change – is being undermined by the escalating trade in climate-harming refrigerant gases. As supplies have shrunk under the EU’s HFC quotas, prices have risen, encouraging an illegal trade to meet demand.

Non-quota HFCs is said to be entering the EU directly from China, via Russia, Ukraine, Turkey and Albania. Key EU entry points and hotspots for illegal trade are thought to be Bulgaria, Croatia, Denmark, Greece, Italy, Latvia, Poland and Malta.

“The EU’s doors are wide open to large-scale illegal HFC trade, driven by quick profits and low risk of punitive measures and the absence of a system allowing customs officials to determine if an HFC import is actually legal or not,” commented climate campaigns leader Clare Perry. “A functioning licensing system is urgently needed and member states need to significantly and demonstrably strengthen enforcement.”

The report makes a number of recommendations including the implementation of a fully functional licensing system to allow customs officials to determine the legality of HFC shipments. It also demands improvements to reporting and monitoring of HFC trade with exporting countries, including publishing the names of new quota entrants and quota values and setting up a system to compare reported data under the F-gas regulation with customs data.