Delfield to complete R290 conversion in ‘18 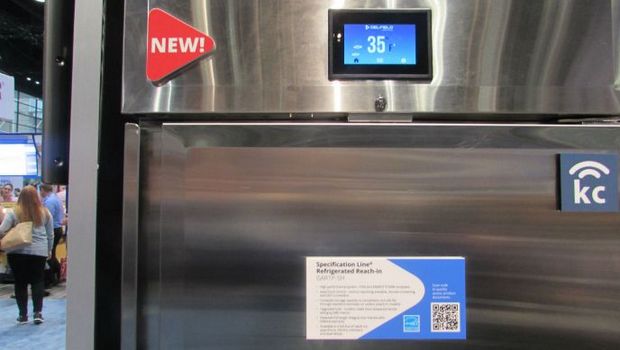 All Delfield-brand refrigeration products will use hydrocarbon refrigerants by the end of this year, said Sara Sunderman-Kirby, product manager at Delfield, a division of Mount Pleasant, Mich.-based Welbilt.

About 75% of the brand’s current product offerings use propane (R290), including all of its standard products, she said, noting that one of the company’s large chain customers pushed the company to convert to propane “quicker than we had planned to.”

Delfield’s R290 products were displayed at the 99th annual National Restaurant Association Show in Chicago in May.

Sunderman-Kirby said a small minority of customers — about 5% — remain “adamantly” opposed to equipment using R290, however, because of its flammability.

“I don’t think they have been educated properly,” she said. “We try to educate them that this is where the whole industry is moving.”

Delfield, which has trademarked the GreenGenius name for its R290 refrigeration systems, is introducing a new refrigerated prep table using R290 later this year, she said. Other prep tables, including a pizza prep table, have already been converted. Other equipment that remains to be converted to R290 includes its specification-product lines.

The company touts the GreenGenius system as being 15%-20% more efficient than HFC refrigeration systems, said Sunderman-Kirby. The increased efficiency can be attributed to both the propane itself and the equipment design, she said.

Sunderman-Kirby also agreed that raising the limit on the propane charge to 500 grams would help introduce new, more efficient refrigeration equipment that could be provided at less cost to customers. “Right now we need to have two circuits in some equipment to meet the charge limitations.”

In addition, some of the products in the company’s line of blast chillers, which are manufactured overseas, can’t be offered in the U.S. because of the propane charge limitations.

Another new feature for users of Delfield refrigeration equipment is an app that allows Delfield technicians to conduct remote monitoring and diagnostics. It also generates alerts when the equipment is not functioning properly.

“With this app, [technicians] can go in and see, for example, if the condenser is running weird or the evaporator temperature is off, so they have some intelligence before they go into the situation,” said Sunderman-Kirby. “They will be more proactive than reactive — when they do show up there, they will know what’s going on.”

In fact, Sunderman-Kirby used the app herself to diagnose a problem she had setting up the display equipment at the NRA Show, and the technician was able to solve the problem remotely without making a service call.