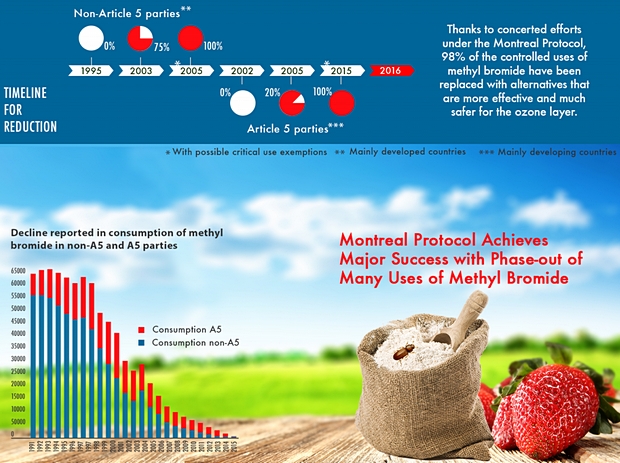 Montreal Protocol parties have successfully replaced 98 per cent of the controlled uses of methyl bromide with alternatives that are more effective and much safer for the ozone layer.

Methyl bromide, a poisonous fumigant gas with a high ozone-depleting potential, was used for many years against a wide variety of pests in agriculture, present in soils and stored products.

In addition it is used for treatment of some commodities in trade to prevent the introduction of some plant and post-harvest pests and diseases to environments where they are not yet present and this is known as Quarantine and Pre-shipment (QPS) uses, which are not controlled under the Montreal Protocol.

The phase-out of nearly 65,000 metric tonnes of non-QPS uses of methyl bromide globally (about 85 per cent of total global use) is a major success story for the Montreal Protocol.

It has had an immediate impact on reducing polluting bromide ions in the stratosphere and aided immediate recovery of the ozone layer. The phase-out process has further contributed to sustainable production and increased competitiveness of many important agricultural sectors around the world.

When the Protocol originally classified methyl bromide as an ozone-depleting substance, alternatives for QPS were not yet widely available, but parties were still encouraged to minimize methyl bromide use and emissions and to adopt alternatives.

According to the Methyl Bromide Technical Options Committee of the Montreal Protocol, an estimated 40 per cent of current QPS uses of methyl bromide are currently replaceable with immediately available alternatives.