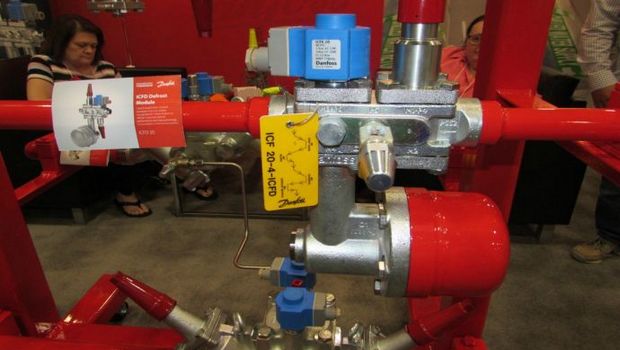 Unlike most defrost devices for evaporators, which use pressure regulators, the Defrost Module employs a mechanical float ball and a liquid drain method, noted Jim Hower, industrial refrigeration national sales manager for Danfoss.

“It keeps excess hot gas from bypassing the evaporator,” only allowing liquid to pass through, he said. This up-to-90% reduction of blow-by gas results in less loading of compressors, which in turn saves energy. End users can cut energy costs by $1 per defrost per evaporator and achieve less than a two-year payback on the extra cost of the device, he added. The module serves evaporator capacity up to 58 TR (200 kW).

Terry Chapp, national business development manager for Danfoss, explained efficiency factor further. “When you are bringing hot gas to the coil to defrost it, and you let it out through a pressure regulator, what happens to the hot gas? It gets recompressed, which is wasted energy,” he said. Moreover, he noted, excess hot gas creates more humidity, which creates more defrost to form. “With a float drainer, it only opens up when there’s enough liquid in it to drain. You use all the hot gas for defrost.“

„The module’s float drainer is not new technology but has been “historically difficult to install and size,” said Chapp. “This is a simplified, more effective solution than previous designs. We created a device that is self-regulating.”