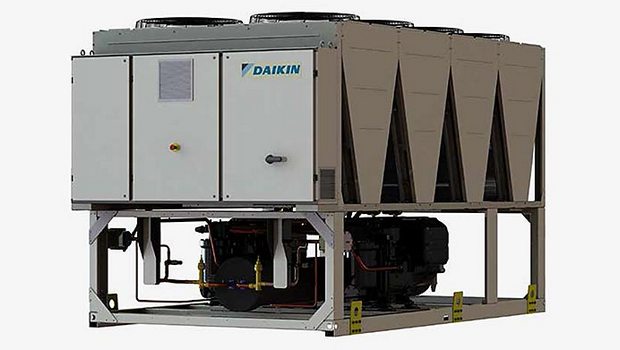 The air-cooled TZ range will be available in cooling capacities from 130kW up to 830kW, with the water-cooled VZ range being produced in capacities from 340kW to 1600kW.

Daikin says its existing TZ and VZ R134a ranges will be maintained in the Daikin product portfolio allowing for a smooth market transition. However, it sees the introduction of the new R1234ze(E) range as “a long-term solution” that supports the F-gas phase down schedule.

The new chillers, first revealed by the Cooling Post, mark Daikin’s first foray into the use of R1234ze which has already been adopted, at least as an option, by most of the world’s leading chiller manufacturers.

An inverter drive modulates chiller capacity at part load in the most efficient way, while Variable Volume Ratio (VVR) adjusts compressor operation at any temperature conditions. A sliding valve fine-tunes refrigerant discharge pressure to match the operating condensing pressure. Daikin says that In this way, refrigerant is compressed to just the right pressure level thus minimising the energy losses typical of fixed volume ratio compressors. Both inverter drive for capacity control and VVR for discharge pressure fine-tuning, are said to work together to optimise unit efficiency at any operating condition.

Thanks to this technology, the current Daikin R134a and new R1234ze(E) series are already said to be compliant with 2021 Ecodesign efficiency requirements.