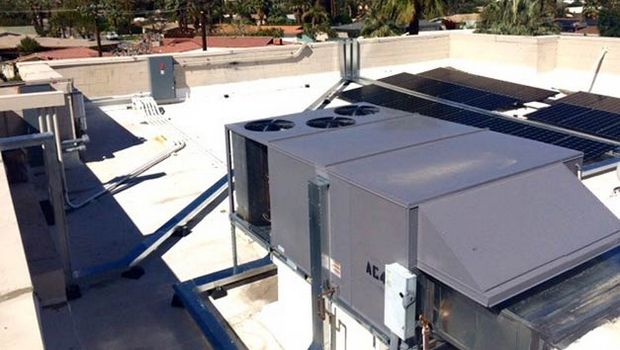 Solar PV and ice battery storage have been combined to offset peak electricity cooling demand at a cultural centre in California.

Ice Energy, a Santa-Barbara-based provider of distributed thermal energy storage solutions, and Horizon Solar Power, one of California’s largest installers of solar PV systems for residential and commercial facilities, have completed the installation of the solar plus ice battery storage system at the Palm Springs Cultural Centre in California’s Coachella Valley.

Ice Bear charges by making ice during off-peak hours and discharges by using the stored ice to cool buildings during peak hours. The smart ice battery is said to reduce peak cooling electricity by 95% for up to 6 hours a day.

During the day, the solar PV supplies the energy needs of the Cultural Centre, including charging the Ice Bears. The Centre’s greatest energy load comes from turning on the air conditioning in late afternoons and early evenings for community events. The Ice Bears now provide up to four hours of cooling during this period, using a fraction of the electricity normally needed.

“We’re witnessing a trend in which the incentives for solar power export are decreasing, so businesses and homeowners are looking for new ways to maximise their investments in solar PV,” said Mike Hopkins, Ice Energy CEO. “A well-designed solar plus ice storage system like this one can provide efficient cooling comfort, optimise the use of solar over-generation, and help utilities to flatten their load on a grid-wide scale.”

Ice Energy has recently announced an extension of its ice battery with solutions specifically designed for supermarkets and general commercial refrigeration.

The Polar Bear range, which are due to be launched by the end of the year, will include models supporting a range of refrigeration storage capacities and application needs.

Like its existing products, the Polar Bear will reduce peak electricity demand by up to 95%, shifting six hours of a building’s refrigeration-based peak load to cheaper off-peak hours. The manufacturer maintains that the Polar Bear ice battery will seamlessly integrate with existing supermarket or commercial refrigeration systems and will also provide a smart-grid controller to monitor energy use and control performance.