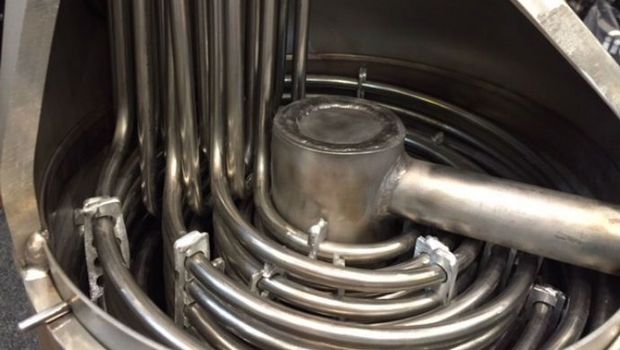 Colmac Coil Manufacturing, based in Colville, Wash., has installed, since 2014, 47 Advanced Direct Expansion (ADX) systems using a reduced ammonia charge around the world, with 36 more to come this year, said its marketing department manager, Patty Smith, at the IIAR 2018 Natural Refrigeration Conference & Expo on Monday.

Also at the IIAR event, Colmac showcased its new SHX Shell and Helix Cascade Heat Exchanger with capacities up to 40 TR (144kW) for ammonia/CO2 cascade systems.

With these technologies, Colmac has put itself squarely behind the trend toward low-charge-ammonia, which is a major theme of the IIAR Conference.

Other companies displaying low-charge-ammonia systems at the event include Frick (a centralized system with remote condensing units), and Hillphoenix/NXTCOLD), Evapco, Stellar and Azane with packaged units.

The core of Colmac’s ADX system is its evaporator, explained Bruce Nelson, president, Colmac Coil and new incoming chair of IIAR. The internal surface of the evaporator tubes has a “wicking structure,” which produces “sufficient capillary pressure to cause liquid ammonia to completely coat the inside of the tubes,” he said. “Otherwise, the liquid falls to the bottom of the pipe, with incomplete wetting.”

According to Nelson what is helping to drive its adoption of the ADX system is its lower cost – 2% to 5% less than that of a traditional pumped overfeed system.