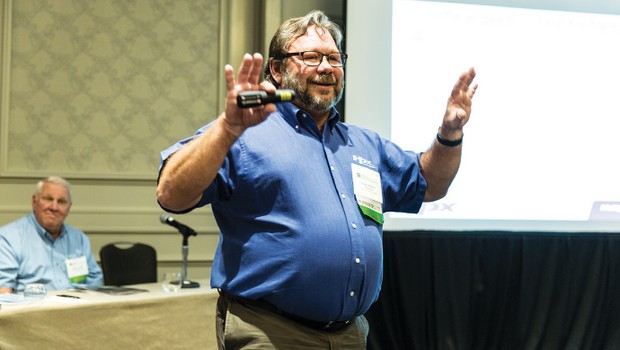 In a bid to increase understanding of transcritical CO2 systems in North America, Hillphoenix’s senior corporate trainer Rusty Walker led a training session in an effort to educate technicians who typically work in industrial plants on the finer points of the technology at the RETA (Refrigerating Engineers and Technicians Association) National Conference, held in Hershey, Pa., September 25-29 2017.

CO2 transcritical systems are similar in many regards to traditional direct expansion systems, but Walker and Katz endeavor to explain the key differences.

CO2 has particular thermodynamic properties that set it apart, including a high coefficient of heat transfer, making it highly efficient. “This quality, in particular, places CO2 as the best alternative to traditional industrial systems,” wrote Katz. In practical terms, CO2’s efficiency is reflected in the compressor displacement it requires compared to ammonia: “Ammonia requires compressors to work at least eight times as much as needed for an equivalent volume of CO2,” he added. CO2 also produces much less heat of compression (wasted energy).

On the other hand, CO2 operates at higher pressures than other refrigerants. And most significantly, it has a low critical point (87.7°F or 31°C and 1055 psig), above which it can’t be condensed to a liquid, creating special challenges. In fact, CO2 above the critical point changes into a “supercritical fluid,” which resembles a gas but is neither liquid nor gas. Because CO2 switches between supercritical and subcritical (below the critical point), depending on the ambient temperature, the system became known as transcritical.

But transcritical systems have three key components not found in conventional systems – a condenser/gas cooler, a high-pressure control valve, and a flash-gas bypass valve – that make it possible to effectively employ CO2 at any ambient temperatures.

On a 70°F (21°C) day, for example, the transcritical system works much like a traditional DX system, albeit at higher pressures (838 psig). Compressed CO2 emerging from the medium-temperature compressors (which are fed by the discharge from the low-temperature compressors in the booster set-up) go through an oil separator and enter the condenser. The CO2 “leaves my condenser as a liquid – it changes state,” said Walker. 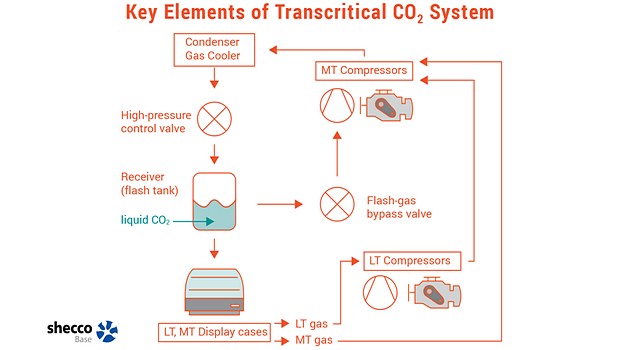 As the liquid CO2 traverses the drop line on the way to the high-pressure control valve, sensors read its temperature and pressure. “If you give me pressure and temperature on a liquid line, what can it calculate?” he asked. “Subcooling,” which is any temperature removed from a liquid below the saturation temperature (when the liquid is about to turn into vapor), the better to prepare it for evaporation and cooling.

In his example, Walker said the amount of desired subcooling was five degrees, which is achieved by modulating the high-pressure control valve to raise the pressure in the condenser to what it would be at 75°F (24°C), or 895 psig.

The subcooled liquid goes through the high-pressure control valve and enters the receiver (flash tank) at 895 psig. That’s too high for the evaporator coils, so “I simply tell the controller to open the flash-gas bypass valve” and reduce the pressure to 500 psig, for which the temperature is 34°F (1°C), he said. “How do you think my [electronic] expansion valves (leading to the evaporators] are feeling about that? They’re getting a nice, cool 34-degree liquid and they’re totally digging it.”

If the ambient temperature is above 87°F, the condenser is now a gas cooler that simply lowers the temperature of the supercritical CO2 fluid. No subcooling is possible – there is no correlation between pressure and temperature.

The high-pressure control valve is now 75%-80% open, creating a pressure drop that finally condenses the supercritical fluid to a liquid in the receiver, with flash gas channeled to the medium-temperature compressor. The flash-gas bypass valve is almost 100% open to maintain 500 psig in the flash tank.

Meanwhile, the evaporators are oblivious to what the ambient temperature is. “They have no idea it’s 90 degrees outside because I’ve managed that on the high side of the system,” Walker said. Adiabatic condensing and other technologies (parallel compressor and ejectors) can be used in warmer regions to improve the efficiency of the system during transcritical operation.

If the ambient temperature is below 41°F, say 30°F, that becomes an issue because the temperature in the receiver is maintained at 34°F. In that case, the high-pressure control valve becomes a “holdback valve,” Walker said. “He’s going to try to stack liquid inside the condenser to make sure I don’t crash the system, and make sure I have a proper pressure drop going from the condenser into the receiver.” The flash-gas bypass valve also works to keep the receiver pressure high enough to maintain the 34°F temperature “that’s going to feed my evaporators,” said Walker.

Walker and Katz stressed that the two special valves – the high-pressure control valve and the flash gas bypass valve – along with the condenser/gas cooler are the linchpin of a transcritical CO2 booster system. They allow the system to work most of the time like a traditional DX system and make CO2 “an alternative to traditional industrial refrigerants that places users on a path toward greater sustainability and higher levels of efficiency,” wrote Katz.