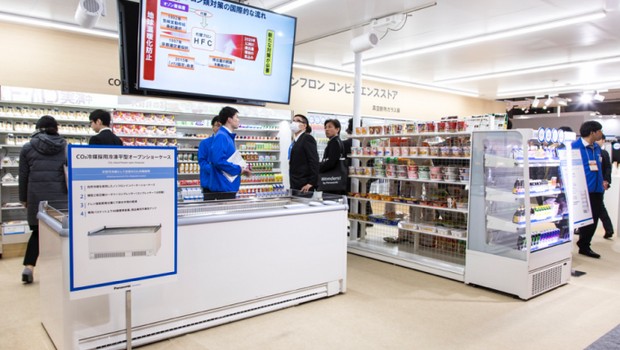 This year’s Supermarket Tradeshow in Tokyo (14-16 February) was marked by increased competition in the CO2 refrigeration market, with new player Mitsubishi Heavy Industries joining the fray and Panasonic pushing a full lineup of CO2 products.

This year’s debut at the Supermarket Tradeshow signalled MHI’s intention to offer CO2 condensing units directly to the supermarket sector, through the partnership with Fukushima.

“This is the first time we are exhibiting our CO2 condensing unit with Fukushima,” said a Mitsubishi Heavy Industries representative.

Akira Fukushima, executive vice-president, Fukushima, commented on the positive effect that natural refrigerant subsidies in Japan have had on demand for CO2 systems.

“Compared to last year, the popularity of CO2 has considerably increased, especially due to the subsidies,” he said.

Electronic displays touted the global movement away from HFCs and towards the use of alternative refrigerants, especially natural refrigerants.

„I do not think that awareness of the revision to the Kigali Amendment and the global HFC phasedown is widespread at the moment, but we are using this opportunity at the tradeshow to help broaden this recognition,“ said Mitsuaki Akuzawa, general manager for Panasonic Commercial Equipment Systems.

„The response from customers this year has been very good.”