Will CO2 be used in U.S. refrigerated transport? 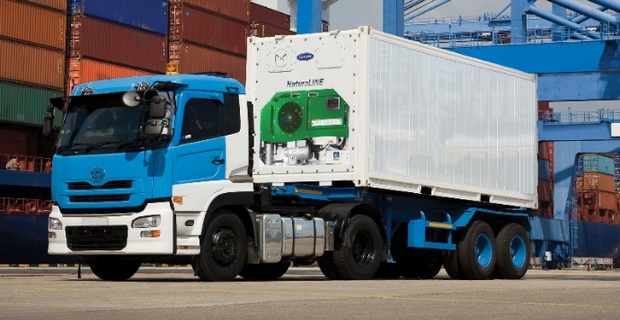 Manufacturers see potential for natrefs in onboard trucking in U.S. market.

While Europe has become the testing ground for trucking applications of natural refrigerants, makers of these systems also have their eyes on the U.S., where the Environmental Protection Agency (EPA) has listed CO2 and cryogenic refrigeration as acceptable for transport refrigeration.

David Kiefer, director of sales, marketing and product management for the North America Truck/Trailer/Rail division of Carrier Transicold, Athens, Ga., said the company’s NaturaLINE container refrigeration system, which it adapted for the Sainsbury’s and Netto trailer tests, is proving that CO2 can be used in an energy- efficient transport refrigeration application.

“While the trailer technology is still in early stages of development, with testing currently being conducted by Carrier Transicold in Europe, it is possible that customer demand in North America would potentially be driven by regulations, incentives or performance,” Kiefer said.

CO2’s global warming potential of one “serves as the benchmark for environmental sustainability, which is what Carrier Transicold continues to relentlessly pursue,” he said.

Thermo King’s CryoTech CO2 system was deployed in the U.S. a few years ago with one customer, the company said. “However, it wasn’t cost efficient for them to continue with the product,” said a Thermo King spokeswoman. “There’s nothing here in the U.S. currently, but there’s nothing technologically that would prevent us from bringing it here again. However, it would have to be upon a customer’s request.”

London-based Dearman is also looking at the U.S. market for the potential introduction of its liquid nitrogen technology for transport “We have been looking at the U.S. very closely,” said Ben Heatley, a spokesman for Dearman. He cited California in particular as an attractive market because of regulations and incentives focused on reducing emissions, and also because it is a major food-producing state with high demand for refrigerated transport and storage.

“Also, the warm climate in the southern United States and in California plays well to our system,” Heatley explained. “While other systems struggle as the ambient temperature goes up, Dearman is actually able to cope very effectively in that circumstance. The ambient warmth of the local area helps liquid nitrogen expand more rapidly, so it works well.”

Heatley said he sees California as a starting point to launch in the U.S., “but in the long run we see America as a crucially important market for us overall,” he said. “We have spoken to a number of operators in the U.S., and we don’t think there are any significant obstacles in the United States.”