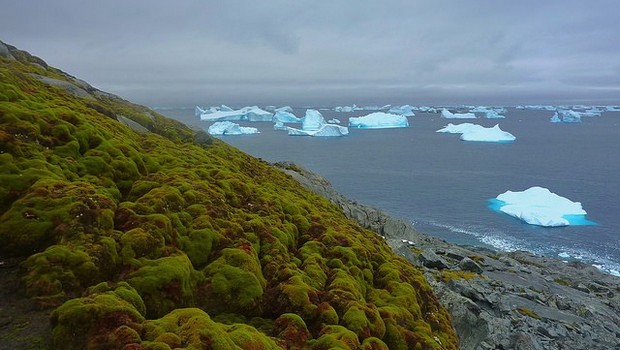 Plant life is flourishing on the Antarctic Peninsula, indicating a dramatic increase in the rate of warming due to climate change.

Antarctica is getting greener. British biologists have documented a four-fold or even five-fold increase in plant growth on the Antarctic Peninsula. They identify the sudden burgeoning of green things as an indicator that the continent is responding to climate change.

In fact, only a tiny fraction of the south polar land mass is home to any plant life, but the first explorers observed mosses growing on the 600km of the peninsula.

In a climate in which temperatures rarely go much higher than freezing, mosses grow slowly – and hardly ever decompose. So any mossy bank becomes a reliable record of shifts in climate dating back thousands of years.

The Arctic has entered a phase of dramatic warming: researchers have documented theadvance of green growth across the tundraand even the advance of exotic infections in the animal population.

Warming in the southern continent has been much more sluggish, but, even in the frozen interior, melting has been observed. And where there is sunlight and liquid water and bare rock, there are the conditions for green growth.

“Temperature increases over roughly the past half-century on the Antarctic Peninsula have had a dramatic effect on moss banks growing in the region,” says Matt Amesbury, of the University of Exeter.

And his colleague Dan Charman says: “The sensitivity of moss growth to past temperature rises suggests that ecosystems will alter rapidly under future warming, leading to major changes in the biology and landscape of this iconic region.

“In short, we could see Antarctic greening to parallel well-established observations in the Arctic. Although there was variability within our data, the consistency of what we found across different sites was striking.”