Climate action ‘a necessity and an opportunity,’ says UN chief 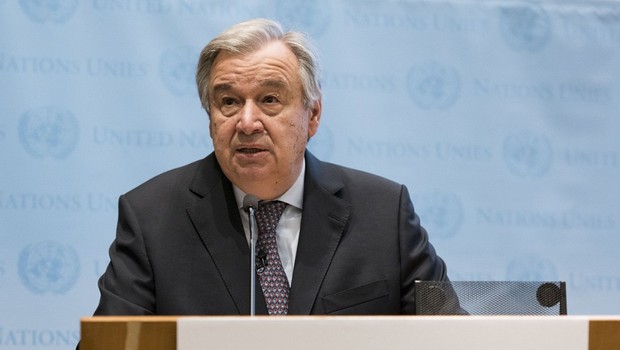 UN secretary-general António Guterres urged nations to implement the Paris Agreement, underlining that the science behind it is “beyond doubt” while pointing out that climate action can provide golden opportunities.

Highlighting the seriousness of the impact of climate change on the planet and its inhabitants, United Nations Secretary-General António Guterres called for sustained action to meet the global challenge and to ensure a peaceful and sustainable future for all.

“The effects of climate change are dangerous and they are accelerating,” Secretary-General Guterres told a gathering of students, business leaders and academics at the New York University Stern School of Business.

“It is absolutely essential that the world implements the Paris Agreement [on climate change] – and that we fulfil that duty with increased ambition,” he underscored, recalling the ground-breaking agreement that entered into force last November.

The Agreement calls on countries to combat climate change and to accelerate and intensify the actions and investments needed for a sustainable low carbon future, and to adapt to the increasing impacts of climate change.

It also aims to strengthen the ability of countries to deal with the impacts of climate change and calls for scaled up financial flows, a new technology framework and an enhanced capacity-building framework to support action by developing countries and the most vulnerable countries in line with their own national objectives.

Science ‘is beyond doubt’

Underlining that science behind climate change “is beyond doubt,” Mr. Guterres said:

“As the Intergovernmental Panel on Climate Change put it: ‘Human influence on the climate system is clear. The more we disrupt our climate, the more we risk severe, pervasive and irreversible impacts,’” he said, recalling that global temperatures have been rising, year after year, and that that last year was the hottest on record.

Furthermore, there are fears that the melt of sea ice and glaciers due to rising temperatures will have deep and far reaching impact: droughts and dry spells will last longer, while natural disasters like floods and hurricanes will be even more destructive.

Impacts of these catastrophic events, Mr. Guterres noted, would be felt in all corners of the world and in all sectors of the economy.

Informing of his intention to convene a dedicated climate summit in 2019 to reach the critical first review of implementation of the Paris Agreement, the UN chief called on all, including those who might hold divergent perspectives on climate change to engage with him on the way forward.

He also pointed to the opportunities that climate action can provide, such as through the creation of jobs and increased economic growth. It is thus, not surprising, that many private corporations, including major oil and gas companies have adopted climate action.

“They know that green business is good business. It is not just the right thing to do, it is the smart thing to do,” he highlighted.

Laying out a five-point action plan to mobilize the world for climate action, the UN chief underscored that he will intensify political engagement with countries to increase efforts to limit temperature rise to well below 2 degree-Celsius and as close as possible to 1.5 degree-Celsius, the first point.

“That is where true change will be achieved,” he said.

The UN chief also said that he will work to with UN Member States mobilise national and international resources for adaptation, resilience, and the implementation of national climate action plans, and called for new and strengthened partnerships, including with the private sector and through North-South, South-South and triangular cooperation.

Further in his remarks, the Secretary-General cautioned that failure to act on combatting climate change would in turn harm the countries themselves for their inaction.

“Those who fail to bet on the green economy will be living in a grey future [but] those who embrace green technologies will set the gold standard for economic leadership in the twenty-first century,” he said.