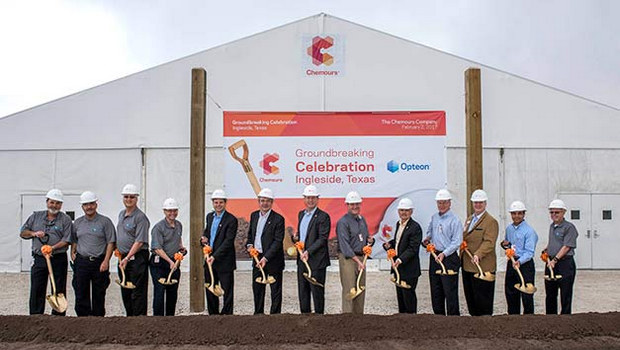 Refrigerant manufacturer Chemours has broken ground on a new R1234yf production facility at its Corpus Christi plant in Ingleside, Texas.

The new $230m plant will triple Chemours’ capacity to produce R1234yf, the refrigerant being introduced to replace R134a in vehicle air conditioning systems. An HFO, R1234yf is also a component in a number of lower GWP refrigerants developed for use in a range of refrigeration and air conditioning applications.

It’s said that the new plant will be the world’s largest HFO manufacturing facility and will serve the growing market in North America and Europe, as well as the rest of the world. Start-up is expected in the third quarter of 2018.

“We’ve already seen tremendous adoption of our Opteon low GWP refrigerants, and it’s estimated that by the end of 2017 there will be over 50 million cars on the road globally using R1234yf refrigerant,” said Paul Kirsch, president of Chemours Fluoroproducts. “Our market projections also suggest that our Opteon refrigerants could be used in well over 10,000 supermarket and commercial refrigeration systems by 2020.”