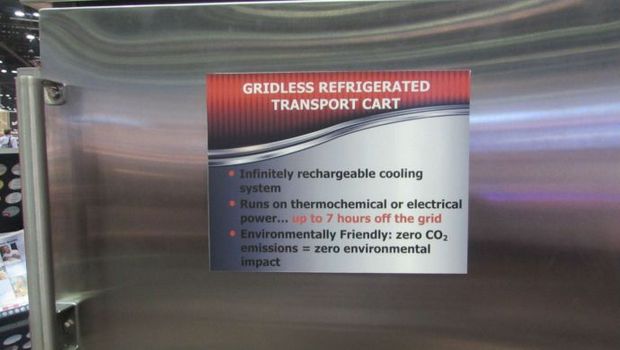 Using ammonia in a thermochemical system, the unit generates cold for seven hours off the grid for catering and other applications.

Carter-Hoffman is partnering with French refrigeration manufacturer Coldway to market a “gridless” refrigerated transport cart for catering, banquet and other applications.

The unit, developed by Coldway, employs a closed, ammonia-based thermochemical system that produces refrigeration without a compressor. It can remain off the electrical grid up to seven hours, and requires seven hours on the grid to be recharged. The system can deliver cold and heat ranging from -30°C to 200°C.

“We’re putting it into commercial refrigeration,” said Paul Emerich, food technology manager for Carter-Hoffman, based in Mundelein, Ill. “It can be used for catering and convention centers.” Coldway, he noted, markets the technology for use in transporting medical supplies and in military applications.

Carter-Hoffman displayed the unplugged unit in February at the NAFEM Show in Orlando, Fla., where it maintained a 38°F temperature all day long.

The Coldway technology generates cold using an ammonia evaporator chamber, coupled with a separate reactor containing proprietary salts and graphite. When the valve connecting the two containers is opened, the liquid ammonia vaporizes, producing cold air that is blown where needed; the gaseous ammonia is channeled to the reactor, where it is absorbed by the salts, releasing heat.

When the ammonia is depleted, the unit is plugged in and the cycle is reversed; heat supplied by electricity causes the salts to release the ammonia, which travels back to the evaporator, condenses and is ready to resume cooling. The unit is capable of several thousand charging cycles with no loss in performance, according to Carter-Hoffman.