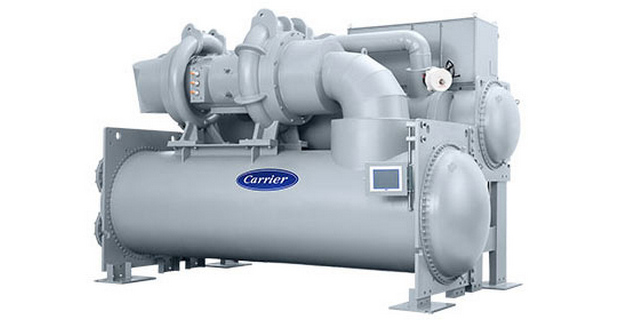 Improvements in compression technology and integration of Carrier’s Greenspeed intelligence variable-speed technology is said to have produced significant improvement to its centrifugal full- and part-load efficiencies.

The AquaEdge19DV was first unveiled at last year’s China Refrigeration Expo in Beijing and launched there in December. The launch at AHR Expo now brings Carrier’s version of the breakthrough technology to North America for the first time.

R1233zd(E) is a single component, non-flammable A1, HFO refrigerant alternative to R123. The refrigerant was first adopted by Carrier’s US rival Trane when it launched its Series E CenTraVac water-cooled centrifugal chiller in 2014.

Optimised for the new refrigerant, Carrier’s two-stage compressor in the AquaEdge19DV is described by the company as a low-speed, direct drive, back-to-back design. This is said to significantly improve efficiency while balancing internal forces, enabling the use of energy-saving ceramic bearings that utilise the refrigerant already in the chiller as lubricant.

The combination of Greenspeed intelligence with the new compressor design that deploys one inlet guide vane for each of two stages is said to ensure stable chiller operation at all times, even at 10% part load.

Equipped with Carrier’s latest achievement in PIC5+ intelligent controls, and integrated with the Carrier lifecycle data management system, the AquaEdge 19DV allows users to easily track and analyse the chiller’s operational data. The control system can also be linked to the user’s building automation system.

The PIC5+ controls also allow a swift restart in just 30 seconds in case of an unexpected power failure.