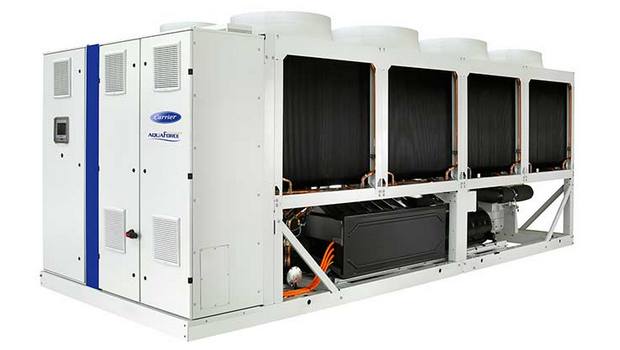 Carrier’s new AquaForce Vision 30KAV chiller, with its facility to use low GWP refrigerant R1234ze, has been hailed as a “huge step” in the drive to phase down HFCs.

The UK launch at Twickenham Stadium last week signalled the first phase of the introduction of the new 30KAV range of variable-speed screw chillers. Equipped with Carrier’s Greenspeed intelligence, the initial range covers cooling capacities from 500kW up to 1100kW, achieving SEER of up to 5.5 in cooling mode, and an EER of up to 3.49 at full load.

The AquaForce Vision PUREtec 30KAV-ZE version, designed exclusively for R1234ze, will coincide with an extension of the range up to 1800kW with premium technologies and additional options.

Guest speaker at the launch event, Graeme Fox, head of Refcom and an expert on the F-gas phase down, explained the factors behind the recent huge increases in refrigerant costs. But he had no comforting words for those present, predicting that the situation would only get worse in the short term.

He explained that in order to meet the 2022 phase down target the average GWP of refrigerants on the market needed to be 900 or less. The demands by 2030 are even tougher when the average refrigerant GWP needs to be 400.

“To be able to achieve something like that the market needs to change very, very quickly. The sad reality is there are just no low GWP alternatives for certain sectors of the market,” he said.

The European Commission has been unsympathetic to the price concerns raised by industry delegations from Germany, Spain and Sweden.

At the stakeholder group meeting in February, Graeme Fox reported that the Commission’s response was that the price rises were exactly what they wanted and expected. In fact, in the case of R410A, for instance, the Commission said the latest prices were well within the boundaries that they anticipated in 2014.

“They even went as far as to say that the price of R410A is actually around €20 per kilo lower than the upper band they had envisaged in 2014. That’s quite a frightening thought because another €20 per kilo is unthinkable for most of my members,” said Graeme Fox.

As has been reported previously, only a major switch to lower GWP refrigerants will make the phase down achievable. Fox maintained that the new Carrier chiller on R1234ze “is one huge step in the right direction”.

David Dunn, managing director new equipment sales at Toshiba Carrier UK admitted that there was a reluctance to move to HFOs in some areas.

“No matter how we look at this we have got to transition to refrigerants like 1234ze. What Carrier is doing is getting back to being the “king of chillers” and leading this market and this industry,” he said.