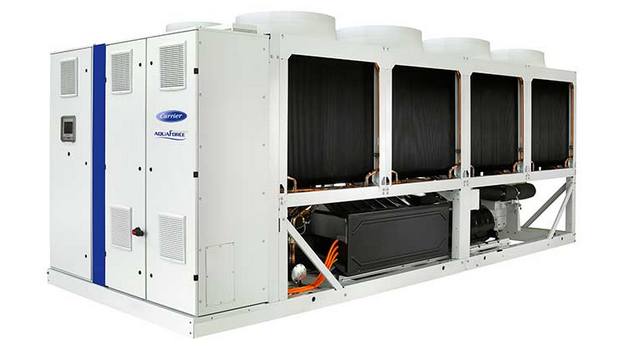 The 30KAV uses Carrier’s Greenspeed Intelligence inverter technology to match load conditions. It is equipped with variable-speed screw compressors and variable-speed fans – AC as standard and EC as an option – as well as optional variable-speed pumps, to automatically adjust the cooling capacity and water flow to match the needs of the application. The result is optimal operation at both full load and part load, achieving an SEER of up to 5.5 in cooling mode, and an EER of up to 3.49 at full load. 30KAV offers energy efficiency up to 40% higher than Carrier’s 30GX range with the same footprint.

A first phase launch will see the introduction of units covering cooling capacities from 500kW up to 1100kW. Further introductions will see the range extended up to 1800kW cooling capacity with premium technologies and additional options. In addition, a version specifically designed for low GWP HFO refrigerant R1234ze will be available later this year.

Operating at external temperatures ranging from -20°C up to 55°C and negative water temperatures, 30KAV is said to be ideal for a wide range of applications. Sound levels are only 90 dB(A).

The AquaForce Vision 30KAV also features Carrier’s Touch Pilot control with a colour touch screen user interface in 10 languages and functions, such as Carrier’s smart energy monitoring to provide customers with smart data and optimise energy savings under real conditions. The 30KAV can be connected to Carrier’s remote monitoring centres where Carrier engineers can analyse data and optimise chiller performance.