Shortly after last month’s global agreement to phase down HFCs, Canada has tabled proposals to reduce its production and imports of these greenhouse gases.

The regulation on phasing down HFCs proposed by the Canadian government, published on 26 November, is a direct response to the Kigali Amendment to the Montreal Protocol adopted last month in the Rwandan capital.

In 2014, Canada’s Department of Environment and Conservation issued a Notice of Intent indicating the intention to regulate HFCs at national level and align with US legislative measures as much as possible. Since then, the government has put forward ideas on measures to cut HFCs, including an HFC phase-down and sector-specific bans.

As a strong proponent of a global HFC phase-down under the Montreal Protocol, Canada has now tabled concrete proposals in the wake of the Kigali deal. Canada intends to limit its HFC consumption by 85% by 2036 (in CO2 equivalent) in line with the Amendment.

“HFCs are among the most potent greenhouse gases emitted around the world,” said Catherine McKenna, Canada’s Minister of Environment and Climate Change.

If these “measures [are adopted it] will reduce emissions ‎by the same amount as taking almost two million passenger vehicles off the road per year for 23 years,” McKenna said.

Much of the proposed regulation focuses on imports. HFCs are commonly imported into Canada in bulk for use in the manufacture, servicing and maintenance of refrigeration and air-conditioning equipment, and in the manufacture of foam-blowing products.

The reduction in HFC imports may encourage manufacturers of products containing HFCs to transition away from them, as the supply of HFCs would decrease.

Under the Kigali Amendment, the overall or ‘baseline’ levels of HFC consumption must be calculated using consumption of HFCs and HCFCs from 2011 to 2013.

HFCs contained in pre-charged equipment will not fall under the phase-down, but will be subject to sector-specific prohibitions based on GWP levels.

Under the second part of the proposal, the use of high-GWP HFCs will be prohibited in specific products as of a certain year, depending on the GWP level and product type.

The product categories that may be applied are as follows: 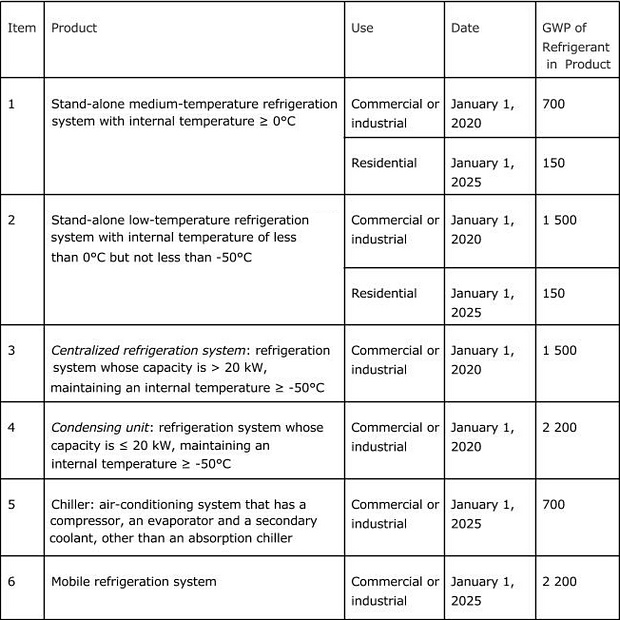 The proposal lists 19 one-compound HFCs to be phased down in line with the Kigali Amendment. 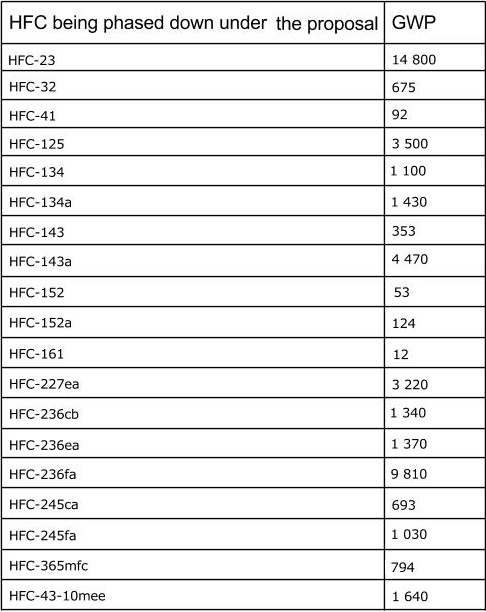 The proposed regulation is now open for comments and any interested party can provide feedback to the government. After industry stakeholders and ordinary citizens have provided input to the Ministry of the Environment, another document will be published before entering into force six months later.