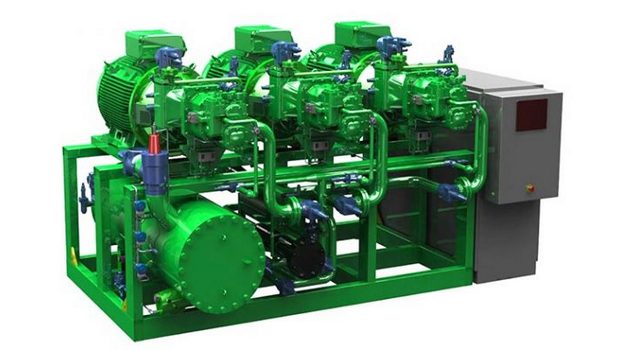 Bitzer’s ammonia compressor packs, which have been selectively available in certain parts of the world since 2014, have arrived in the UK.

The ammonia packs (ACP) use compact screw compressors controlled by an integrated variable speed drive. Use of either two or three compressors per pack gives standby capacity and resilience for critical process application where continuity of cooling is vital.

The first Bitzer ACPs were launched in the US in 2014 in a capacity range of 100 to 450TR. It was subsequently introduced across North and South America, followed by Indonesia, Australia and New Zealand. Now the packs are being introduced in Europe.

Six ACP systems have been installed in the UK so far. These have been in a variety of applications, including a food manufacturing facility for a large high street bakery chain, a commercial ice-making plant, and a major pizza production facility.

In addition to its efficiency, which can be further enhanced with the addition of an optional economiser module, it also offers rapid commissioning due to its plug-and-play design.

“The modular design means that contractors can quickly connect up ACP units on site with a few simple pipework and electrical connections. This dramatically speeds up the whole process of installation and commissioning. We believe it is a game-changer for industrial refrigeration,” said Glass.

The carefully-thought-out design allows ready access to valves, sensors and connections for ease of installation and servicing, and the unit comes equipped with wi-fi connectivity and full Modbus integration. The design features controller and sensor redundancy to enhance reliability, while the stand-alone control panel has number cable-tree to assist installation.

A range of larger modular ammonia packs is also planned. The OS95 series, to be introduced “soon”, will offer cooling capacities up to 2.4MW from a single unit.