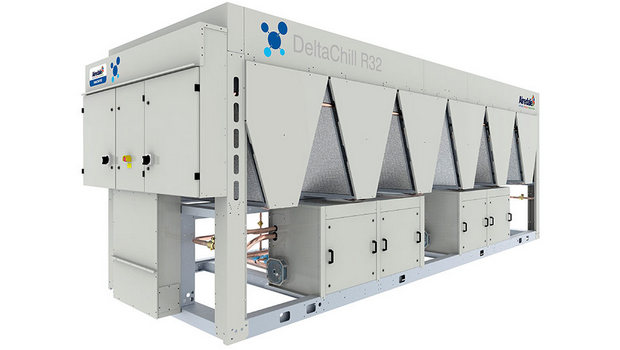 The increase on its previous R410A range was recorded during comprehensive tests over several months on prototypes with various compressor options.

Airedale selected Bitzer Orbit 8 scroll compressors for the Azure DeltaChill and were provided with support from Bitzer’s UK office and given access to advance performance data.

Callum Teahan, Airedale’s lead mechanical engineer, who headed up the product development team, said: “The forerunner to Airedale’s DeltaChill R32 was based on the R410A version of Bitzer’s scroll, so it made sense to trial the R32 version in order to minimise design changes to the platform. In addition, model variants available, such as the GSU Orbit+ and Economiser compatibility, made it attractive in terms of meeting future changes under Ecodesign Tier 2 (2021) efficiency targets.”

Prototypes included different evaporator technologies, as well as Airedale’s traditional choice of condenser. Tests were carried out at standard rating conditions and at the extremes of the operational envelope to check performance and reliability. Other measures included tests for ESEER, Ecodesign SSCEE, oil return tests in worst-case conditions (low mass flow), and high and low supply water temperature.

“We initially faced some challenges in relation to oil management,” says Callum Teahan, “as R32 has a lower density and mass flow compared with R410A.”

The problem was eventually solved with help and technical support from Bitzer who supplied special version compressors fitted with oil sight tubes, enabling the development team to monitor conditions within units during testing.

Having not only proven the reliability of R32 technology but established that it yields a valuable efficiency advantage, Airedale is now rolling it out across its new generation of packaged DeltaChill chillers, available in cooling capacities from 450kW to 1MW.

It includes training for installers in the safe handling of R32, as part of Airedale’s BESA-accredited flammable refrigerant training courses.