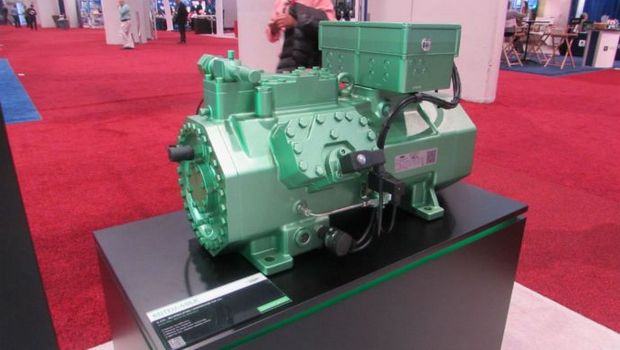 The ECOLINE+ six-cylinder line is a follow-up to the UL-approved OCTAGON Transcritical line; both cut commercial system costs and lend themselves to industrial applications.

The five-model ECOLINE+ compressor line, which made its global debut last October at Chillventa in Germany, is the next generation of Bitzer’s five-model OCTAGON Transcritical six-cylinder, 35-to-50 HP line.

The six-cylinder OCTAGON Transcritical models, rated for 2,300 psi, received approval last week from Underwriters Laboratories (UL) for use in the U.S.; they will be manufactured at Bitzer’s Atlanta factory and released immediately. This brings to 13 the number of UL-approved Bitzer transcritical models, with nine more expected in the next few months, said Joe Sanchez, engineering manager, Bitzer US, in an interview with R744.com.

The ECOLINE+ units are currently in field trial, with more models coming out this year, said Sanchez, adding that UL approval is “in process and we hope to have it within the next year.”

Both the ECOLINE+ and OCTAGON Transcritical six-cylinder, 50-HP compressors “give us more economical choices for our customers for supermarket racks and also allows them to break into big industrial applications like cold storage,” said Sanchez.

The reason the 50-HP compressors are more economical, explained Sanchez, is that fewer of them are required for a rack. “Some of the [transcritical] racks in the U.S. have had up to eight or more compressors because of the size limitation. Now they can use fewer compressors and save the cost of components, frame, piping, and installation.”

The ECOLINE+ compressors also come with a line-start permanent-magnet motor that improves their efficiency under “all conditions,” said Sanchez. This technology has been undergoing testing at Bitzer and in selected systems in the field for more than five years. The motors can be operated directly and with frequency inverters.