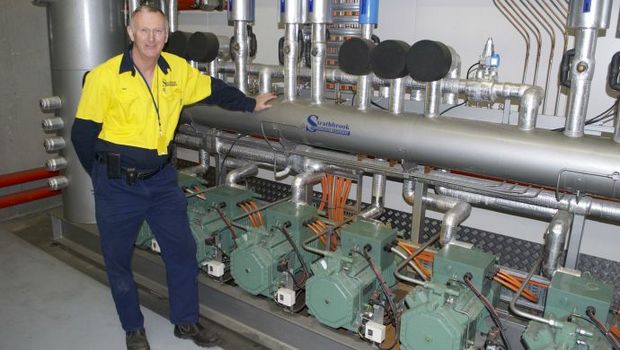 This is Strathbrook’s third plant for F. Mayer – an evolution building upon their previous first and second-generation CO2 systems. The first-generation system was a CO2/HFC cascade plant followed by two CO2 transcritical racks with an HFC cooler.

Compared to F. Mayer’s existing plants operating on R404A, the transcritical plant is 15 times bigger in terms of floor space and twice the ceiling height; in effect, 30 times the volume. Yet despite a refrigeration capacity 30 times greater, the plant has not even doubled the power bill (70% increase).

In terms of environmental impact, the CO2 transcritical system represents a global warming potential of 350 kg CO2 compared to an R134a/R404A plant at 1,140,000 kg CO2.

F. Mayer is „not afraid to spend a bit of money to get a good result,” Wilson told Accelerate Australia & NZ magazine. “Many end users want the cheapest system they can get. That’s not what we’re about. We seek out customers who pay their bills and want a quality result. The people that run the company – it’s a family business – wanted a plant that would stand the test of time in 20 years.”

“For us it’s all about energy efficiency, savings and improving our carbon footprint,” says F. Mayer’s managing director, Robbie Mayer. “We’re really pleased that we’ve managed to drastically increase our business without increasing our power usage. We are a much greener business now.”

F. Mayer imports premium gourmet food products, predominantly from Europe, for the hotel, restaurant, cafe and speciality food industries. It distributes dry and frozen goods to leading retailers and vendors across Australia including Belgian chocolate, cheeses from Europe, the UK and the Asia Pacific region, as well as brands like San Pellegrino.

Having wildly outstripped its own growth projections for the past decade, the firm has been working with Strathbrook to install tailored natural refrigerant solutions in response to growing demand for its product.

While a number of industrial CO2 transcritical plants have been installed in ice rinks and cold stores in Europe and the US, Strathbrook’s third iteration with F. Mayer is one of only six transcritical plants in Australia. Two more Strathbook installations feature among the six: their second-generation plant in Sydney and a training plant at the TAFE Western Sydney Institute’s Nirimba complex.

“We knew the colder climate in Melbourne would benefit the CO2,” Wilson says. “Once again [F. Mayer], having seen the success of the last two jobs, had built trust and they had the budget.”

One of the first alterations was to add water sprays to the gas coolers to pre-cool the refrigerant going into a secondary heat exchanger system by 5-10°C. The system pressure was raised only moderately but the greatest energy efficiency gains came in the form of two high-demand 240 kW ammonia chillers, each with an extremely low ammonia charge of 4.9 kg.

“We knew the low-hanging fruit was to replace the R134a chiller with an ammonia chiller,” Wilson says. “We optimised the system to reduce the charge, that was the key thing. Less is better.” With a COP of 10:1, the two ammonia chillers each provide 240 kW of cooling at +15°C saturated suction with “a tiny bit of gas going around very fast in a tiny bit of pipe path”.

Wilson had factory-built one of the ammonia chillers before accepting the Melbourne job with F. Mayer. He later heard from Bitzer that that no-one in the world had yet mastered the system. “Bitzer refused to warrant the chiller because no-one in the world had been able to build one, including Hillphoenix, whose R&D budget is larger than our total turnover! No-one has been able to get it right. So we were worried, however, it runs really well.”

Ammonia’s superior functionality owes to its exceptional performance at high suction temperatures. “It’s unique in that if you can keep the ammonia condensing temperature constant, let’s say at 35°C, you can raise the suction. Normally your power goes up, but with ammonia, once you get above about 7.5°C suction, your power consumption goes down and you’re looking at a COP of 12.“

“The CO2 transcritical was a cost-effective no-brainer in the freezer because it’s so much more efficient than anything else.”

Due to F. Mayer’s exponential growth another plant extension or new facility purchase was on the horizon. To future-proof the plant, Strathbrook put freezer equipment and a freezer floor in the chiller so it could be converted into a freezer at a later date. “Now, we can turn the transcritical rack off, take the pipes off it in the plant room, connect it to low-stage and turn the existing chiller into a high-stage rack.”

Mayer says he has engaged with a number of end users on the proponents of CO2 technology. “I always tell customers or competitors, who ask about our refrigeration, about our use of natural refrigerants like CO2 and encourage them to look into it. I usually give them Ian’s details to have a chat and explain how we heat the floors with liquid glycol and heat exchangers to get those extra savings.”

“The system has to be reliable because there’s millions of dollars worth of stock in these rooms coming from a long way away, so you can’t build something that’s technically fabulous but dubious in terms of reliability. This is why we cascaded these systems together rather than compounding them. So far we’ve had no problems in terms of reliability whatsoever.”