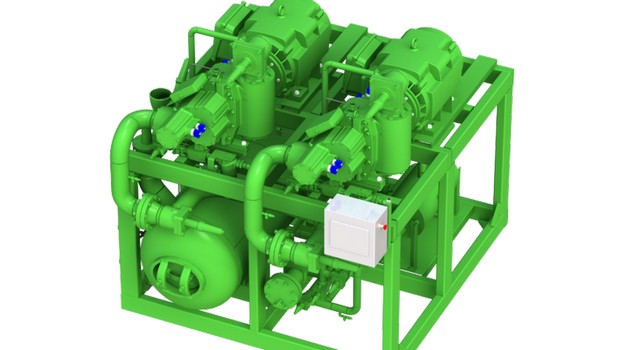 OEMs are tailoring Bitzer’s ACP for low-charge packages, and have installed them at end users.

OEMs have reconfigured German compressor maker Bitzer’s three-year-old ammonia compressor pack (ACP) to their specifications in low-charge packages and installed them at “up to a dozen” industrial end users, according to a Bitzer U.S. executive.

“OEMs will buy an ACP from us and tailor it,” said the executive, Kurt Bickler, director of OEM and aftermarket sales, Bitzer U.S., in an interview at the Global Cold Chain Expo in Chicago last month.

Bitzer has also been supplying ammonia compressors to OEMs of low-charge packaged units like Azane, Evapco and NXTCOLD.

The modular design of the ACP includes two or three compressors in a frame (one with a VFD), as well as oil management systems and a controller. The ACP, which handles capacities ranging from 142 TR (500 kW) to 1,024 TR (3,600 kW), comes with an optional economizer that enables reduced ammonia charge. ACPs with up to nine compressors can be connected to a single controller.