Ammonia chiller reduces energy use by 77% 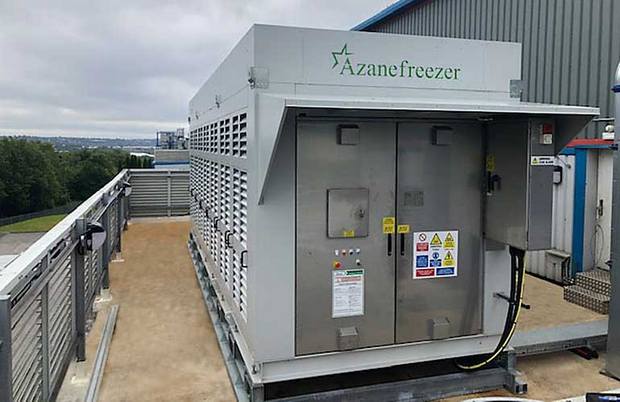 The installation of a low charge ammonia chiller system at a major UK food manufacturer’s storage facility is said to have led to a 77.3% reduction in energy consumption.

James T Blakeman is one of Europe’s leading manufacturers of sausage and meat products. It has pledged to reduce its carbon footprint by 55% by 2025.

“The previous system accounted for around 24% of our annual electricity consumption in 2018,” revealed Blakemans MD Phil Blakeman. “Comparatively, the Azanefreezer unit is much more energy efficient, consequentially having lower electricity consumption and lower CO2e emissions. Being one of our biggest energy uses on site, we expect to see significant savings on our CO2e emissions for years to come.”

With a cooling capacity of 290kW Blakemans’ Azanefreezer 2.0 provides cooling to maintain a temperature of -22°C in each of the cold stores, both of which are used for storage of frozen packaged meat products and raw ingredients. The pre-packaged air-cooled system is located on the roof, with all valves positioned externally to eliminate risk associated with leakage.

The plug-and-play freezer has now been in operation for 12 months and data collected from the 14,100m3 cold store facility indicates that the plant consumes around 35KWh/m3 per annum. According to Star, this relates to a 77.3% reduction in Blakemans energy consumption and reduces average CO2 emissions to less than a tonne per day.

The drop in energy usage and carbon output is due the Azanefreezer’s clever design, which uses a low-pressure receiver and four evaporators, each of which is equipped with reverse cycle defrost technology.

In keeping with their focus on sustainability, Blakemans also took the option to include data monitoring and plant performance optimisation system Ethos. This collects operational data from the PLC and analyses the gap between the ideal and the actual operating conditions to identify inefficiencies.

Star carried out the design, manufacture, installation and commissioning of the Azanefreezer 2.0. The project was completed following a carefully phased 15-week installation programme which required the temporary relocation of the existing coldstore condensers to make space for the Azanefreezer. Star’s expert engineering team carried out decommissioning and disposal of all existing equipment, whilst maintaining temperature continuity and ensuring 24/7 operation in both cold stores.