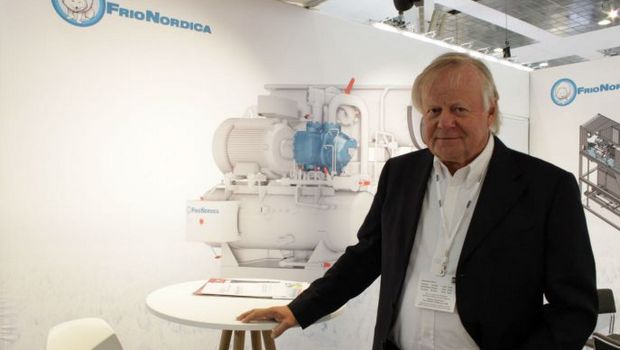 Norwegian manufacturer FrioNordica is tapping into the aquaculture industry by introducing the company’s low-charge ammonia system in Norway and Chile.

Aquaculture or the farming of fish has been substantially growing as an industry since the 1970s and now represents half of total fish caught globally. Developing the fish quickly requires a warm growing environment. FrioNordica’s ammonia heat pump helps farm fishermen in Chile and Norway to accelerate fish development.

The system uses seawater and a minimal amount of ammonia to heat or cool the fish farming pens, depending on the fish being farmed.

The heat pumps are similar to refrigerated seawater (RSW) systems in design but with a slightly different combination of materials. For seawater applications the heat exchangers are made with titanium, but stainless steel is used for freshwater.

The solution can be used for all aspects of aquaculture including chilling fish eggs, heating young fish, and processing. “We mainly focus on the salmon farming industry. This industry is bigger than anything else,” Per R. Samuelsen, FrioNordica’s Managing Director, explained.

In Chile and Norway the growth of Atlantic salmon is accelerated by using the heat pumps in a salmon hatchery.

The Norwegian company has developed low-charge ammonia chillers, on top of its ammonia heat pump, for fisheries’ ice plants and RSW systems.

“We have a very low ammonia charge. It depends on the size of the system, but it’s typically 80 kilos in one unit,” he said. “So that’s very low, because a conventional system will have several hundred kilos but it is important for the safety on board to have a small ammonia charge.”

FrioNordica uses so-calleds spray chiller technology to reduce the amount of ammonia in the system, alongside seawater or glycol – depending on the application – to transmit the cooling. “You get super high quality [fish with this system]”, he believes.

The company has had a lot of success with this system in Peru. “Peru is the biggest fishing nation in the world, except for China […]. It’s a very big producer of fish meal, and traditionally fish meal is a volume thing, but now [Peruvian fish farmers] are focusing a lot on the quality, because it’s used for feeding the farmed fish,” he explains.

Towards a more sustainable fishing industry

Samuelsen is seeing a lot of demand for ammonia systems in South America and the developing world, but he remains disappointed that some companies occasionally request Freon systems. “It’s amazing to see how many are still using R22,” he said.

FrioNordica only works with ammonia and has done so for a long time. “We look at ammonia as safer then Freon systems […]. You have to make a good plant and high specifications when you [install ammonia systems] and take care of the safety,” he points out.

Samuelsen believes “companies who don’t think about being sustainable will be out of business in a few years”.