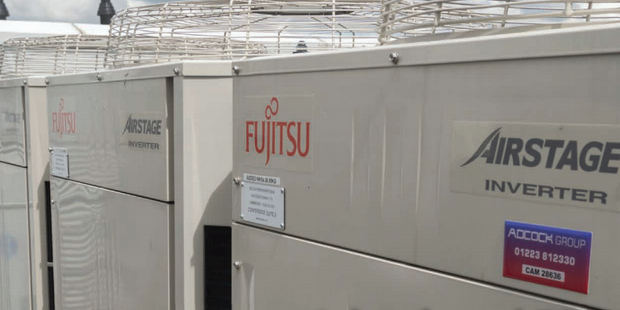 The project on behalf of E2, a leading provider of bespoke energy management, involved replacing all of the air conditioning and air handling units in the 145,000ft2 building in Birmingham. The replacement project was phased over an eight-month period while the building remained occupied.

There were six phases in total which required individual working areas of the building to be relocated temporarily during the fit-out, allowing contractors to have sufficient access to each area whilst ensuring that staff were not disrupted. Works included the decommissioning of the existing server room.

For better efficiency, the fit-out teams and contractors worked alongside one another, refurbishing the interiors and installing the replacement ductwork and fresh air ductwork at the same time. This meant that both teams could complete each individual phase as they went along, allowing business to resume as normal as soon as each phase was complete.

The internal system design had to allow for easy access for maintenance and servicing which is essential for guaranteeing that the system remains fully up and running at its best at all times, without the need to disrupt staff working in the area. Through efficient team planning this was easily achieved.

In total 11 Fujitsu VR-II heat recovery systems were installed, along with 27 condensing units and 120 ducted fan coils and two split systems. The systems are fully managed via by a BACnet Gateway and Lite touch panel system control.

The server room systems were replaced with a heat recovery close control system comprising three DencoHappel modular heat recovery units which automatically share the cooling output equally over a six-week period whilst monitoring the temperature, keeping it constant and controlled through a single control unit. Being far more proficient, the systems provide precision cooling within 1ºC and claims to offer highly efficient heat recovery with energy savings of up to 85%.

Adcock managed all aspects of the R22 replacement project, from the safe disposal of the R22 refrigerant through to the complex design phase which plays a huge part in determining whether the entire system will offer the very best levels of performance and heat efficiency.

The entire project was completed both within specified timeframes and to the high standard promised.

Fujitsu Services have subsequently awarded Adcock the contract to service and maintain the new systems.

The full details of the project can be viewed and downloaded here.