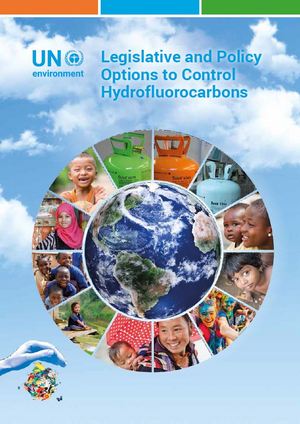 The most commonly used alternatives to HCFCs are hydrofluorocarbons (HFCs). These substances belong to the so-called “Kyoto Protocol basket of greenhouse gases”. They have a high global warming potential (GWP), but do not deplete the ozone layer, so they are commonly used as substitutes for ozone depleting substances (ODS), especially for HCFCs. Since based on the provisions of the Montreal Protocol (MP), the global consumption and production of the HCFCs is currently being phased out – the HFCs are being phased in. It is estimated that in 2015 a minimum 525,000 metric tons of these substances were produced and consumed globally. If this trend is not stopped the HFCs will become major (6-9 %) contributors to climate change by 2050. Taking this threat into account the Parties to the Montreal Protocol endorsed in October 2016 the so-called “Kigali Amendment” which introduced to the MP the controls on consumption and production of HFCs.

In order to follow and facilitate the HFC phase-down schedules contained in the Kigali Amendment, the Parties, including both developed and developing countries, will have to implement certain measures. This booklet contains a recommended set of legislative and policy options which the developing (Article 5) countries may wish to consider for implementation. It is intended to be a guide/tool for countries. It complements the previous publication “HCFC Policy & Legislative Options: A Guide for Developing Countries“(2010).

Each section devoted to a specific option contains a general description of that option as well as the advantages and disadvantages of its implementation, criteria for the relevant decision-making and the selection of the appropriate timing, support measures which can be introduced to make the implementation more effective, status of implementation in certain countries and linkages to the related references.

The options are also color-coded to indicate the suggested timing for implementation: orange – implementation to accompany ratification of the Kigali Amendment, blue – implementation before the freeze date and green – implementation at a later stage of the HFC phase-down process. The recommended schedule of implementation of each option in Group 2 Article 5 countries (GCC states, India, Iran, Iraq and Pakistan) and Group 1 Article 5 countries (all other Article 5 countries) is contained in the “Conclusions” chapter. The options to be implemented as quickly as possible after the data on HFC consumption in the country are available from a national HFC inventory (so that the general strategy for HFC phase-down can be developed) include: starting the process of awareness raising among stakeholders, introducing the emission control measures and mandatory reporting by HFC importers and exporters. It is recommended that the establishment of national annual import quotas for HFCs and the introduction of some restrictions on the placing on the market of products and equipment containing HFCs, as well as the training of customs officers and refrigeration
technicians on HFCs, could be the next steps for implementation.

Annexes to the booklet contain the full text of the Kigali Amendment and related decisions of the Parties, HFC phase-down schedules mandatory for Article 5 and non-Article 5 countries, HFC equipment logbook, recommended customs codes and classification of HFCs and other fluorinated gases and HFC-containing RAC&HP equipment.

OzonAction will continue to work with countries and provide the necessary technical assistance to implement the “enabling activities” identified in the Kigali Amendment for a smooth transition to an HFC phase-down, recognising that there is no “one-size-fits-all”.