International standards in refrigeration and air-conditioning 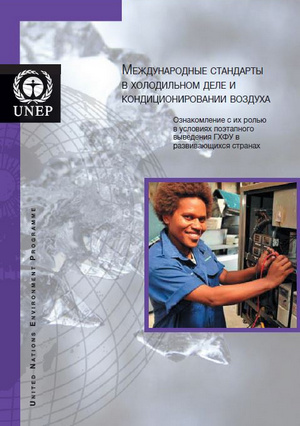 With the phase-out of HCFCs (hydrochlorofluorocarbons) under the Montreal Protocol on Substances that Deplete the Ozone Layer progressing, the introduction of alternatives with not only zero ozone depleting potential (ODP) but also low global warming potential (GWP) and improved energy efficiency is becoming an issue of increasing importance, especially in developing countries.

HFCs (hydrofluorocarbons), which have a zero ODP but many of which have high GWPs, are still the most commonly used replacement for HCFCs. There are a number of other available replacements. These include ‘ozoneand climate-friendly alternatives’ such as natural refrigerants – hydrocarbons (HCs), ammonia (NH3) and carbon dioxide (CO2); and lower-GWP HFCs, both saturated HFCs (e.g., HFC-161 and HFC-152a) and unsaturated HFCs (sometimes referred to as hydrofluoroolefins, HFOs, e.g., HFC-1234yf, HFC-1234ze). However, these alternatives exhibit a range of specific properties which may prevent them from being unconditionally adopted: flammability, toxicity and high working pressures can limit their applicability and require special practices or approaches for safe handling. Since these characteristics represent a deviation from normal practices, standards can assist with easing the application of these alternative refrigerants for enterprises that are not necessarily familiar with how to do it.

A standard (sometimes called a ‘norm’), is a formal document developed by experts to ensure a certain uniform level of products and services. International standards adapted by countries to suit the national situation, or directly adopted into national legislation, bring with them the great advantage of a tool which is agreed by the consensus of participants of national committees, with the aim of achieving high quality and safety. Such standards can be useful tools for the introduction of alternatives and technologies for ozone depleting substances (ODS) especially through specifying safe handling practices and provision of measures for minimising risks.

In the process of the HCFC phaseout, developing countries can take advantage of experiences and lessons learned by the developed countries that have already significantly progressed along the path of HCFC phase-out and in the development and application of such standards.

Since the middle of the last century, especially in developed countries, several standardization organizations were established to produce standards – documents based on consensus of group of participants, to ensure a certain uniform level of goods, products and services quality. Development of new standards and their regular revisions reflect general technological progress, the changing needs and requirements of international trade. Through the voluntary use of standards, producers, users and other stakeholders can assure and be assured of comparable levels of quality around the world. International, regional and national standards can provide an easily accessible mechanism and examples for nationally-applicable requirements which could be adapted/ adopted in Article 5 countries for alternatives to HCFCs.

The main international and regional standardization organizations are the following:

Some national standardization organizations have a reach and influence which can be considered as regional or international in operation, for example:

This booklet is intended to be a concise guide for National Ozone Units (NOU), as well as for refrigeration associations, government departments, including those working on standardization issues (but perhaps not familiar with the specific requirements of the Montreal Protocol), and other stakeholders in the refrigeration and air-conditioning sector in Article 5 countries.

During the preparation of this booklet, a questionnaire was distributed to participants in several UNEP OzonAction Regional Network Meetings. The respondents, which were mainly NOUs, were requested to provide feedback related to their national experience with international and regional standards, the level of their cooperation with various institutions, associations and stakeholders and to identify any barriers to the introduction of low-GWP alternatives and technologies in their country.

The responses revealed that the vast majority of NOUs from countries participating in the survey have very little experience at the national level of the use of international or regional standards. The majority of respondents also indicated that they did not have, or were not aware of, any regulations or standards which could specifically impact the adoption and use of low-GWP alternatives. It was also highlighted that existing regulations may not be appropriate to allow for the full range of low-GWP alternatives to be adopted.

Taking into account the responses from the questionnaire, this guide provides a general introduction to standards in the refrigeration and air-conditioning (RAC) sector, including an overview of existing standards related to HCFCs and their alternatives, barriers to alternatives and the process of the adoption of international and regional standards at national level. A general overview and summary of the main relevant standards is provided in Chapter 5. It is beyond the scope of this document to cover in detail all the related standards, particularly the plethora of specific national standards.

The scope of the standards covered in this document can be grouped into four main categories: