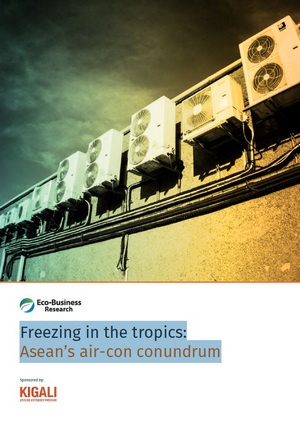 The rapid rise in Asean’s electricity demand in recent years has led to a surge in CO2 emissions and pollutants that threaten to create an environmental crisis for a region already vulnerable to the impact of extreme weather and poor air quality.

Primary energy demand has increased by 70% in the region, collectively known as the Association of Southeast Asian Nations (Asean), from 2000 to 2016 with a further rise of 70% predicted up to 2040. Coal accounts for the largest share of the growth.

Electricity demand is expected to more than double to 2,000 tera-watt hours (TWH) up to 2040. Most of this growth comes from residential and commercial buildings, mostly for cooling, such that by 2040, air-conditioning could account for up to 40% of Asean’s overall electricity demand.

This crisis can be avoided if the region adopts more efficient technologies and supports a culture change in cooling consumption.

A survey of 424 respondents from Indonesia, Malaysia, Singapore, Thailand, The Philippines and Vietnam, conducted in November and December of 2017, highlighted the problems of over-consumption and lack of awareness of the cooling challenge but also identified several opportunities.

The context of Asean’s electricity demand and supply as well as the differing economic situations of the member states should also be considered when formulating a strategy to avert the cooling crisis.

Economic growth has risen along with fossil fuel based electricity consumption

Asean’s economic success story over the first 50 years of its existence can be tracked alongside its thirst for energy. Energy demand has expanded by two and a half times from 1990 to 2013, and its rate of growth is one of the fastest in the world.

Electricity consumption to power home appliances such as air-conditioning (AC) in the tropical Southeast Asian region has increased at a rate of around 7.5% annually from 155.3 TWh in 1990 to 821.1 TWh in 2013. Over 80% of this electricity came from fossil fuels, with coal-powered stations being particularly dominant in the region. Hence overall carbon dioxide emissions for the region have grown at similar rates. Cooling consumes an increasing amount of this growth.

The upward trajectory of electricity consumption and CO2 emissions can be significantly reduced through the adoption of better technologies. If Asean countries switch to energy efficient products and lighting, they can reduce their consumption of electricity by 100 TWH at a saving of US$12 billion annually. This is the equivalent to the annual production of 50 power plants of 500 MW capacity, meaning that 50 power plants would not have to be commissioned.

When energy consumption for ACs in Asean countries is forecast using the best available technology for air-conditioning (BAT scenario), huge savings can be achieved.

If Malaysia and Singapore adopted the BAT scenario, for example, there would be an actual reduction in overall energy consumption for ACs by 2030 for these two countries, compared with 2015 levels. This would be despite growth in populations and affluence.

Conversely, if there is no change to current consumption habits (the business as usual, or BAU scenario) then energy consumption in all Asean countries would increase by a compound annual growth rate (CAGR) of 5.7% by 2030.

Consumers in the region seem to have a basic awareness that more efficient technologies can result in a lower electricity bill. Yet they are not aware of quite how important this is to ensure that the region achieves its targets for CO2 emission reductions, as reflected in Nationally Determined Contributions (NDCs) to the Paris agreement. This lack of awareness is not helped by the experience of the average city dweller in the region, who regularly encounters excessive cooling in buildings which sends the wrong message that controlling efficiency is not a major priority.

The behavioural habits of survey respondents on air-conditioning reflect the relative affluence of the different countries in the region and the installation rate of air-conditioning units in households.

Respondents from Vietnam, The Philippines and Indonesia were more likely to report the use of other cooling systems apart from air-conditioning being used in public buildings, whereas respondents from the more developed economies of Malaysia and Singapore were less likely to notice more environmentally-friendly alternatives.

Similarly, respondents from Vietnam and Indonesia were more likely to agree that air-conditioning was a status symbol with respondents from Singapore (where the installed rate was estimated at between 76-100%) much less likely to see it as anything other than a necessity.

Despite concerns about the excessive cooling of public buildings, 77% of Singapore respondents agreed or strongly agreed that their government was actively managing power demand through initiatives such as promoting energy efficiency standards in air-conditioning. At the other end of the scale, only 30% of respondents from Vietnam agreed or strongly agreed that the same was happening in their country. The most populous country in the region, Indonesia, scored 38% for this question, indicating the scope for improvement across the region through government intervention.

There was no shortage of suggestions from survey respondents as to how the region could better manage its cooling challenge. These ranged from more effective use of passive cooling methods or refrigerant-free alternatives to air-conditioning, to innovative finance and recycling programmes to promote the uptake of more energy efficient models. Respondents were also unanimous in wanting to see their countries move towards clean energy adoption.

Governments around the region have agreed on targets for AC efficiency and are at different stages of local implementation. Given the radical differences in the size, state of economic development, and political situations of the countries that make up the Asean region, the challenges for governments vary considerably. However, in all cases, there are some clear areas where governments can be focusing efforts and directing change more effectively to ensure more efficient cooling.

This paper aims to highlight both the economic and environmental benefits for driving the region towards more efficient use of ACs as well as highlighting some of the most obvious areas that governments, businesses and consumers can direct their immediate attention. Without significant efforts to make cooling efficient and clean in Asean, the region will miss out on economic and social gains while over-polluting the local and global environment.