This report of seizures and iPIC consultations is based on the cases reported in the context of the Europe and Central Asia (ECA) Ozone Protection Award for Customs and Enforcement Officers (4th
edition) which is part of the work programme of the UNEP Regional Ozone Network for Europe and Central Asia (ECA network). UN Environment is grateful for the valuable contributions of the award winning organizations and individuals and highly appreciates their outstanding efforts and exemplary dedication towards the enforcement of trade provisions under the Montreal Protocol. 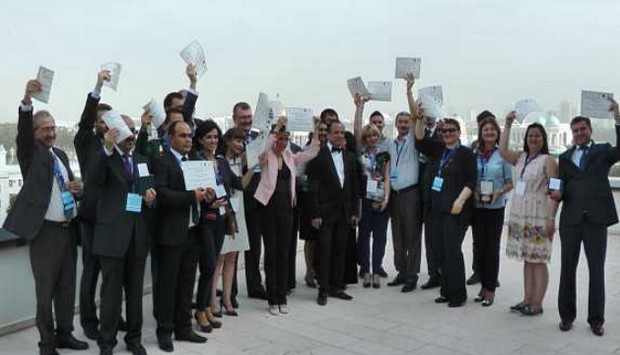 Between May 2014 and April 2016, the award winners reported 258 seizures of 9,947 pieces of equipment and 10,201 refrigerant cylinders / cans containing more than 70 tonnes of ozone-depleting substances (ODS), mixtures, products and equipment. In addition, informal Prior Informed Consent (iPIC) consultations before the issuance of trade licenses, avoided 16 unwanted / illegal shipments of more than 174 tonnes of ozone-depleting chemicals and mixtures. Ukraine also estimates that about 50,000 split air-conditioning systems illegally entered the country over past years, which were declared as HFC-134a equipment but actually contained HCFC-22.

The award is endorsed by the World Customs Organization, Ozone Secretariat, Multilateral Fund Secretariat, UN Environment OzonAction as well as the meeting host, the State Committee on Environment Protection and Land Resources of Turkmenistan. Representatives of all organizations signed the award certificates.