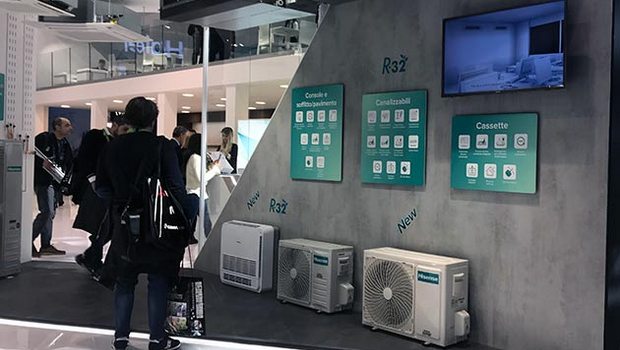 For the first time, all the unitary air conditioning manufacturers announced R32 introductions. Even the Korean manufacturers LG and Samsung, who had previously been quite reserved in discussing their intentions regarding the lower GWP gas, made significant moves. In addition to a range of smart inverters on R32, LG even took the significant step by joining Daikin in featuring an R32 version of its Therma V domestic heat pump.

Panasonic, one of the early pioneers, announced a full switch to R32, consolidating all its residential and commercial air conditioning ranges, including its newly designed RAC floor consoles, split, multi-split and cassettes, to be R32 compatible.

Panasonic said that it is now ready to supply any kind of residential single split and multi split system with up to five ports in addition to commercial splits of up to 14kW.

“Consolidating our portfolio to be compatible with R32 is an important step towards reducing the impact of air conditioning on our environment,” explained Alfredos Armaos, Panasonic Heating and Cooling UK country manager.

Alongside early pioneers like Daikin, Mitsubishi, Toshiba and Fujitsu, Chinese manufacturers Midea and Haier exhibited recently announced R32 units as well as Gree, Hisense and others.