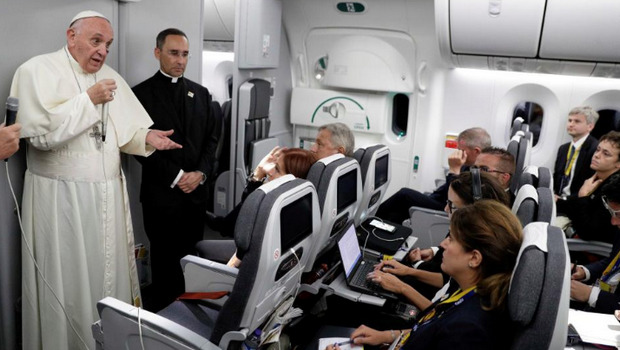 Pope Francis said the recent spate of hurricanes should prompt people to understand that humanity will “go down” if it does not address climate change and history will judge those who deny the science on its causes.

“If we don’t turn back, we will go down,” Francis told reporters on Sunday on the plane returning from Colombia. Francis strongly backed the 2015 Paris agreement on reducing global warming, from which the United States withdrew this year.

Francis spoke as hurricane Irma pounded central Florida as it carved through the state with high winds, storm surges and torrential rains that left millions without power, ripped roofs off homes and flooded city streets.

Francis was asked about recent hurricanes, including Irma and Harvey, and if political leaders who do not want to work with other countries to stem global warming should be held morally responsible for future effects on the planet.

“You can see the effects of climate change and scientists have clearly said what path we have to follow,” he said, referring to a consensus by scientists that global warming is caused by human activity such as fossil fuels.

“All of us have a responsibility, all of us, small or large, a moral responsibility. We have to take it seriously. We can’t joke about it,” he said. “Each person has their own. Even politicians have their own.”

Ahead of the Paris summit in 2015, Francis wrote a major encyclical, or papal letter, on the care of the environment which backed the gradual elimination of fossil fuels to stem global warming.

The accord, agreed on by nearly 200 countries, aims to cut emissions blamed for global warming. The United States committed to reducing its own by 26 to 28 percent, compared with 2005 levels, by 2025. Many world leaders criticized Trump for pulling out.

U.S. President Donald Trump withdrew from the Paris agreement shortly after visiting the Vatican in May. The Vatican had urged him to stay in the accord.

A Vatican official said at the time that the U.S. move was a “slap in the face” for the pope and the Vatican.