Are HFO/HFC blends the best option for supermarkets? 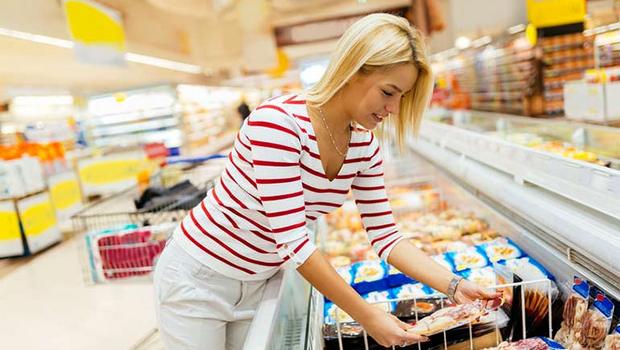 Chemours maintains that the results reveal that choosing future refrigerant technology purely on the GWP of the refrigerant alone is a poor indicator of the total climate change emissions produced by a refrigeration system. Refrigeration technologies using non-fluorinated products such as hydrocarbons and carbon dioxide often lead to excessive 10-year life cycle costs (LCC) to achieve minimal emissions reductions when compared to the baseline R404A replacement R449A technology, the report says.

The 10-year life cycle costs calculations used in the report take into account the initial cost of purchasing and installation (CAPEX) and the operating costs (OPEX).

According to Chemours, the technologies providing the best emissions reductions and lowest 10-year LCC are its lower GWP A2L alternatives, the HFO/HFC blends Opteon XL20 and XL40 (R454C and R454A).

It’s normally assumed that the main issues in tackling emissions are leak reduction and replacement of HFCs with low GWP alternatives. However, the Chemours study maintains that the largest contribution to climate change over the lifetime of a refrigeration system is normally the indirect emissions produced from electricity generation. Therefore, system performance and energy efficiency potentially have a far greater effect than the GWP of the refrigerant itself.

However, energy efficiency will vary depending on the technology used, the climate where the system is located, system architecture, and even the source of the electricity that will vary by country.

The seven technologies considered in the study were:

Each of the listed technologies were considered in stores of two different sizes:

The baseline store for a standard supermarket considered a typical layout with 1-2 MT and LT compressor packs and using a lower GWP R404A replacement like R449A (Opteon XP40) in a distributed system as a baseline.

In terms of 10-year life cycle costs, none of the options could better the baseline R449A system. However, the lower GWP Opteon A2L alternatives R454C and R454A showed an increase in 10-year LCC of up to 5%.

And, while many have strongly promoted the use of “naturals” refrigerants like the hydrocarbons and carbon dioxide, Chemours says that all of these technologies had 10-year LCC over 15% higher in the moderate Leicester climate than R454C and R454A. 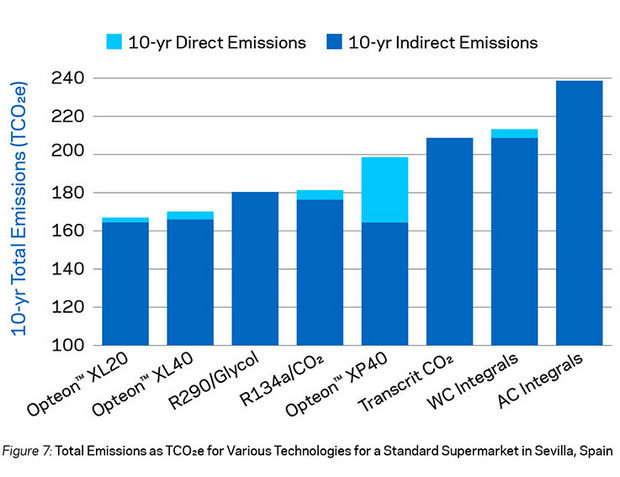 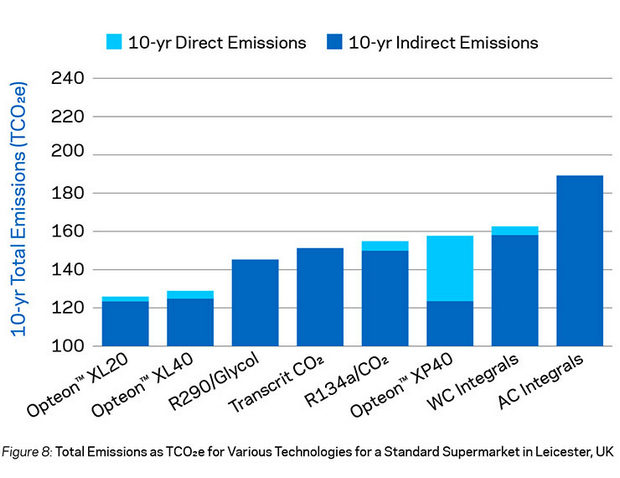 R454C and R454A came out on top again for the lowest total emission values in the standard supermarket model. The lower GWP options showed up to 25% lower emissions than using a transcritical CO2 booster system and up to 15% lower than when using a R290/glycol system.

The secondary loop technologies were closest to the R454C and R454A options in the warmer climate of Seville, but still with at least 6%-7% higher emissions. In the more moderate Leicester climate, the difference in emissions increased to 13%-23% higher than the Opteon XL refrigerant technology.

The AC and WC integrals in the standard supermarket had the highest total emissions due to the very high energy consumption of these technologies.

Notably, the baseline technology, Chemours R404A replacement Opteon XP40 (R449A), was one of the least favourable options from the point of view of total emissions due to the relatively high GWP and the contribution of the direct emissions.

The baseline store architecture for the small supermarket considered the same distributed system as for the standard supermarket with 1 MT compressor pack and 1-2 LT systems.

Once again, on a purely financial basis, the best options, in terms of the European F-gas regulations, were R454C and R454A, despite a 6% increase in life cycle costs over the baseline technology.

The AC integrals, again, had the lowest initial cost but, unlike the larger store, did not have the highest 10-year LCC. However, both the AC integrals and WC integrals still had a 16%-23% higher 10-year LCC than the baseline technology. In the warmer climate of Seville, the transcritical CO2 booster system had the worst life cycle costs, with the secondary loop technologies having the closest 10-year LCC to the low GWP Opteon XL options, but still 13%-17% higher than the baseline technology and 9-12% higher 10-year LCC than the R454C and R454A lower GWP HFC/HFO blend options.

In the more moderate climate of Leicester, the secondary loop systems had the worst 10-year LCC values (23% above baseline), followed by the WC/AC integrals and transcritical CO2 booster system in the 16-19% above baseline range, and 11-13% higher than the R454C and R454A HFC/HFO blend options.

The emission results for the smaller store format were largely in line with the larger supermarket format. The AC integrals had by far the highest total emissions due to their poor energy efficiency, with the WC integrals also showing worse total emissions than the baseline R449A option.

In the warm climate of Seville, the transcritical CO2 booster system is also producing significantly higher total emissions than the baseline R449A system, and, even in the moderate Leicester climate, produced 16%-19% higher emissions than the lower GWP R454C and R454A refrigerant options.

The emission figures from the distributed direct expansion systems were calculated at 5%, a leak level that Chemours argues are being achieved by responsible retailers across Europe. However, Chemours says that with leak rates up to 10% per annum, the direct emissions from systems using the low GWP options R454C and R454A had only a very small contribution to the total emissions. Even at 15% annual loss rates, total emissions from systems using the higher GWP refrigerant R454A (Opteon XL40) were still lower than using a R290/glycol or transcritical CO2 booster system, even in the moderate climate of Leicester.

The report – The Path to Reducing Climate Change Emissions from Commercial Refrigeration Applications – can be downloaded here.