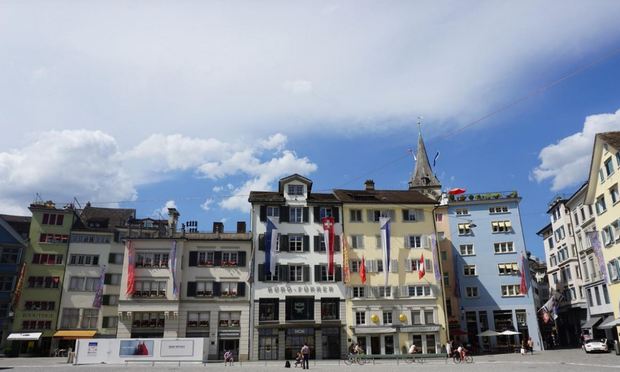 A study of two air-to-water reversible CO2 (R744) heat pumps with ejectors at a Swiss shopping center led to improved system performance at a subsequent installation, according to an article by Jonas Schönenberger, Head of Research and Development at Swiss engineering consultancy Frigo-Consulting.

The heat pump project was supported by the Swiss Federal Office of Energy, and the shopping center accepted higher investment and life-cycle costs to develop sustainable and forward-looking technologies with natural refrigerants. Since the commissioning of the heat pumps, “their operation has been investigated, and valuable experience has been gained,” noted Schönenberger.

In 2019 and 2020, the shopping center, in Lucerne, Switzerland, replaced a fossil-fuel heating and air-conditioning system with two CO2 heat pumps.

Frigo-Consulting conducted an operational investigation, collecting data from the beginning of October 2020 to the end of September 2021. During this time, no fundamental changes were made either on a component level or in the control strategy of the system.

Since then, the Frigo-Consulting team successfully commissioned a follow-up jobsite using the same CO2 technology.

In addition to the energy optimizations, the system was simplified, and investment and operating costs were reduced. This improved the operation result with a measured increase in efficiency.

Overall, adjustments in the system design and operation resulted in an increase in the COP of around 8% compared to the original model. “It can be assumed that a further increase in efficiency can be achieved in further follow-up jobsites,” said Schönenberger.

Schönenberger added that he was “confident that reversible air-to-water CO2 heat pumps with ejectors will play a relevant role in future for heating and air conditioning of modernized buildings.”

In the original heat pump systems, the average COP in heating mode of the heat pumps was measured at 3.33, without considering the dual mode (simultaneous heating and air-conditioning). This was 1.0% below the predicted performance. The measured COP was lower than the predicted COP in the upper-temperature range, which was attributed to factors such as part-load operation. However, in the lower-temperature range, COPs were higher than expected, which was attributed to the lower return flow temperatures of the facility during heating operation.