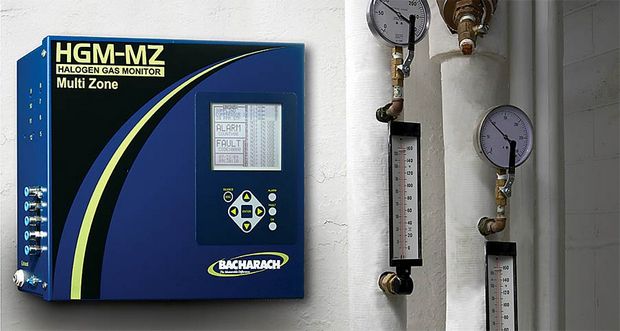 R514A, the low GWP refrigerant replacement for R123, has been added to Bacharach’s library of detectable gases.

R514A, developed by Chemours as Opteon XP30, is a refrigerant with a very low GWP of under 2 and is targeted as a replacement for R123 in centrifugal chiller applications. It is a blend of HFO 1336mzz(Z) (74.7%) with trans-1,2-dichloroethene (25.3%), a gas not previously used in refrigerants.

ASHRAE 34 classes R514A as a B1 refrigerant, meaning that it is not flammable, but is classed as having higher toxicity, with on OEL (Occupational Exposure Limit) of 323ppm. Bacharach says that this highlights the importance of the early detection of refrigerant leaks which could be harmful, and reduce refrigeration system efficiencies.

Bacharach claims that its non-dispersive infrared (NDIR) technology allows its instrumentation to measure refrigerant levels as low as 1ppm.

The calibration curve for R514A has now been added into the software for Bacharach’s Multi-Zone and Single Zone continuous refrigerant monitors as well as its portable spot-leak detection devices.